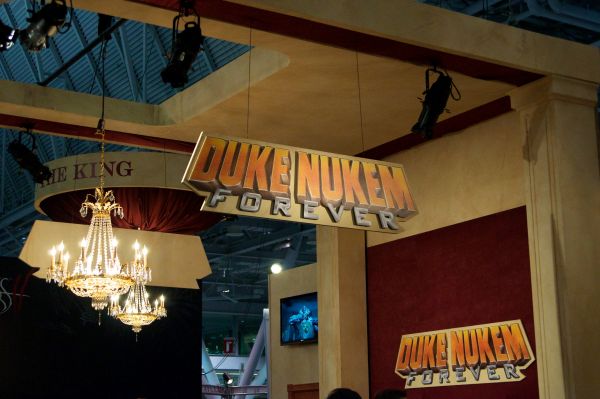 Duke Nukem Forever will not have a co-op mode.  That's right folks -  a gameplay element that helped give Duke 3D a special flair will not be available in Duke Nukem Forever.  That's the news that came straight from Gearbox Software's Adam Fletcher when I chatted with him today at PAX East after getting some hands on time with the game.  While the lack of co-op is heart breaking to me, the fact that I actually played Duke Nukem Forever today is in a way, unbelievable to me.

There's plenty of previews around the internet with some in depth hands on impressions with the game.  We played the same area - the demo starts with Duke taking on the one eyed alien beast in a football stadium.  Once conquering the foe and kicking his eye through a field goal the camera pans back and reveals Duke being pleasured by two girls while playing "his game."  When one girls asks if it was good - Duke responds - "after 12 fucking years it should be."

And after 12 years the game is an interesting dichotomy.  On one hand, the game is very true to the original.  On the other its sort of stuck in the era it was created.  That said, despite several "old" gameplay elements, there are elements that feel fresh and great to see again.  There are several environmental puzzles, ones in which you aren't hand-held through.  For instance, one puzzle that I was stuck on involved me removing heavy barrels from a mine cart and then pushing the cart up a hill.  This was part of a bigger puzzle that involved Duke finding some gas for a buggy to get around the level. Other than the puzzle elements, gameplay felt familiar with many of our favorite weapons returning like pipe bombs, shrink rays, the devastator and more.  Sadly, one thing that has changed is that you can only carry two guns at a time - though pipe bombs are separate.  This is quite the departure from the original game - Gearbox solves this by placing "ammo crates" around the level as well as having plenty of weapons scattered throughout the level.

Another thing that brought back memories of the original was the interactive environments in Duke Nukem Forever.  Weather its showers to turn on an off, or a white board that you can actually draw on - these things reminded me of the moment you saw the pool table in Duke 3D.  I was told other fully interactive items included a pinball game, an air hockey table and more.

Overall the game felt like Duke should.  The pig cops were a bit more brutal than I expected, but it wasn't long before it felt like home using Duke's shotgun to dispatch of them.  The lack of co-op in the game is obviously saddening, but if you were a fan of the original Duke it looks like you won't be disappointed with Duke Nukem Forever when it launches this May on the Xbox 360, PlayStation 3 and PC.