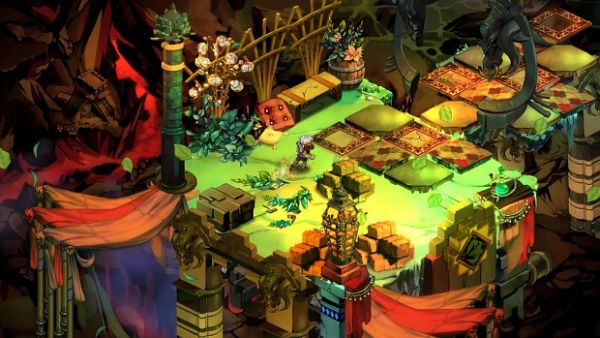 While cruising the show floor waiting for our Duke Nukem Forever appointment, a little game called Bastion demanded my attention. I had heard a lot of buzz about it recently, and once I laid my hands on it, I knew I was playing something special. Sporting a unique art style, and even more unique narration technique and some of that old-school isometric gameplay we all love, Supergiant Games' first effort appears to be a classic in the making.

The main character, known only as The Kid, gains a variety of weapons in the short demo. You get a two-handed warhammer to use for melee attacks and both a bolt gun and a bow for ranged options. The bolt gun fires crossbow bolts in rapid succession but has a long reload time, while the bow fires a single shot, whose power varies depending on how long you draw the bowstring. It felt a bit like the Torque Bow in the Gears of War series.

An armory lets you select between your available weapons and special abilities, and another shop allows you to imbibe various spirits to enhance your abilities, such as damage output, critical strike percentage and other standard RPG stat boosts.

What separates Bastion from pretty much any other game I've played is the fact that the entire game is narrated. A drawl-laden voice guides you through the world of Bastion, and the game's story is filled in as you play. The writing for the narration is stellar, as is the voice actor who seems to be channeling his innermost Sam Eliott. Most actions the boy takes are commented on by the narrator, including killing powerful enemies, alerting the player to the presence of new paths, and even cracking wise when you step off a ledge or otherwise do something stupid.

The narration ties nicely into the fact that the world builds itself as you progress through an environment, paths will lay themselves out before you as you wander, and the narrator will fill in details about what you're seeing. While the demo obviously takes place at the very beginning of the story, you could see hints that there will be branching paths and alternate routes around obstacles.

The art style is very painterly, and looks quite a bit like some of the later games in the Mana series. The colors really seem like they're exploding out of the screen, and the characters are all rendered lovingly.

While there's no co-op or multiplayer in the game, you can rest assured I'll be looking forward to play the full game when it releases this summer on Xbox Live Arcade and PC.