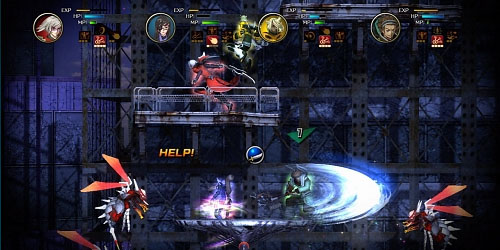 Hungry for a new co-op brawler to wrap your hands around? We are too, and it seems Necromachina is ready to fill that slot. Resembling a Castle Crashers/Castlevania mashup on a neo-Earth, Necromachina features 4-player co-op and is developed by none other than Square-Enix. Based on the trailer, we have decided the game has individual character powers unleashed by an MP (Magic Points) gauge, as well as co-op combo's if more than one player unleashes at the same time. Until recently, Necromachina was titled "Moon Diver," and is said to be an XBLA and PSN title in the near future.

The reason for the original title "Moon Divers" is the characters titles; They are 5 ninjas that descend (or dive), from the moon. With ninja skills at their disposal, we may eventually even see attack combos that slightly resemble The Dishwasher: Dead Samurai. We'll be sure to keep an eye on this one as it certainly has a lot going for it so far.