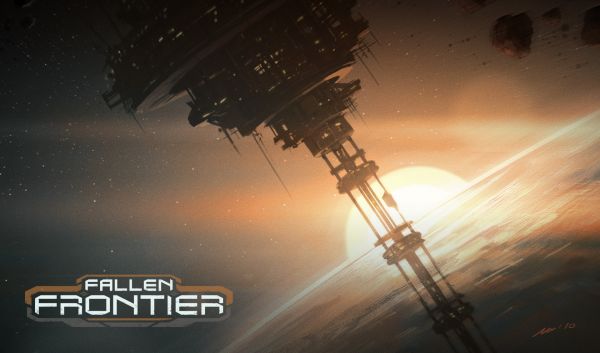 It was only last week that Fallen Frontier was announced and we were immediately gripped by its unique art style and developer backing from ex-Halo team members.  At PAX East today we got some extensive hands on time with the co-op platformer from Moonshot Games  and walked away mightily impressed as well as a bit bummed we'd have to wait until 2012 to get our hands on the title.

Our demo started with Kat and I grabbing controllers and jumping right into a small intro section.  After getting acquainted with some control elements liking moving within the 2D world with tricks like double tapping A to pull up to higher ledges, using the right analog stick and trigger to shoot, and the left trigger to fire off a grappling hook and the B button used to melee - yes its a 2D platformer with melee.

Kat says - "I love that melee!" - and while the melee itself is a rarity in platfomers, perhaps its the action of the 2D ragdoll like physics that excites my co-op partner so much.  Maybe she just likes to hit things.

The setting of the game is definite sci-fi with a gorgeous focus on a hand drawn "concept art" style.  The backgrounds are lush with detail and color though they lack "tight detail."  The foregrounds however are where you'll find the detailed looking objects, enemies and platforms so the player never gets lost within the background rich looking art of the background.  There's a definite contrast here and its really impressive looking when you see it in motion.

As we progressed through levels we were able to pick up different weapons like a carbine and a shotgun.  The shotgun while powerful, was limited to three shot before overheating and needing to wait for a cool down.  The carbine is capable of performing headshots - which when lining up a bunch of baddies - goes right through their poor, unsuspecting skulls.  We also had grenades at our disposal to dispatch groups of enemies with satisfying explosions followed by plenty of 2D ragdoll deaths.

As we played I was reminded of the old PC game Abuse, which producer Michel Bastien said was a definite inspiration as well as other games - no doubt titles like Bionic Commando and Shadow Complex.  The Bionic Commando inspiration comes from the grappling hook that's usable in the game, which also can be used to grip enemies and pull them around.

On the co-op side the entire game is playable in co-op online and offline with each player in the role of a unique character to the story.  The game will scale the difficulty to the number of players with more enemies and more difficult enemies.  One of the things that really stood out as us while playing was the strategic elements of co-op.  Flanking enemies is something co-op players are accustomed to doing, but in Fallen Frontier flanking is done vertically.  So while Kat was basically pulling enemies towards her with several shot gun blasts, I was able to quickly drop down in behind them and work back up towards them finishing them off.  Its a very satisfying maneuver when completed.

Fallen Frontier is being targeted on PC, XBLA and other downloadable platforms though nothing is confirmed yet as the game doesn't have a publisher.  The current plan is to have the game out in 2012.  Over the next year Moonshot will be revealing more on the story and characters of the game and they promise to have the player immersed in a rich, sci-fi world.   We can't wait to be right there with them.