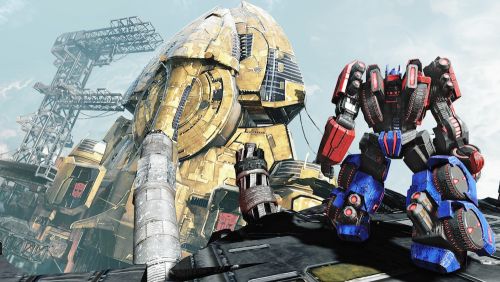 This week the plumbers are at it again, bear witness to the fall of the Transformers' home planet, and PC gamers who like it rough are in for a treat.

New Super Mario Bros. 2 (3DS) It's-a-Mario game! Stomp on as many mushroom people and turtles as you can! Run amok in the Mushroom Kingdom, dress as a raccoon, and steal the citizens' gold coins! 2 player system link co-op

Transformers: Fall of Cybertron (360,PS3,PC) Play as both the Autobots and Decepticons in the last battles of the War for Cybertron. Too bad the developer ditched the co-op campaign. The cooperative Escalation mode should keep you coming back for more. . 4 player online co-op

Dark Souls: Prepare to Die Edition (PC) The twisted world of Dark Souls has encroached upon another gaming platform. PC gamers asked for it, now they got it. Enjoy your inevitable demise. Again. And again. And again. 3 player online co-op

Here are the retail releases for the week. Drop us a line in the comments section if we missed anything.