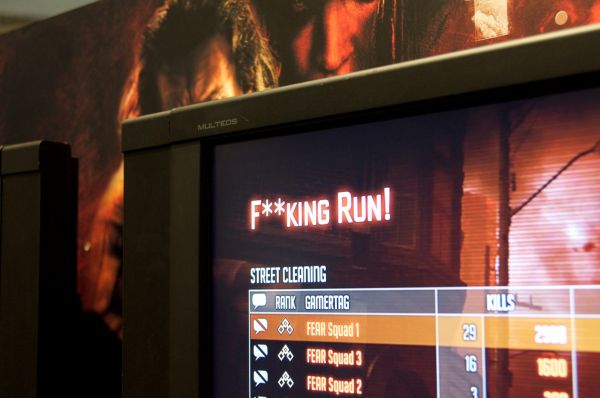 F.E.A.R. is a series of horror shooter games that I had an interest in to begin with, then it waned with time. I primarily blame the fact that I don’t normally enjoy shooters that leave me on my own. In the case of F.E.A.R. 3 that loneliness is not only gone, but you’ll end up terrified together quite effectively. Tally and I played through a bit of the F.E.A.R. demo at PAX East in a mode very fittingly titled “F**king Run!”

“F**king Run!” is a survival mode with a twist. You see, the majority of the game relies heavily on ammo conservation and the use of cover. With “F**cking Run!” it’s balancing the available options. Moments that allow you to choose to either rush in and melee attack, or hang back and shoot from safety are punctuated by one of the most terrifying feelings in the world: Yes, you are being followed.

Alma is back, and she’s a bit of a cloud of death that is chasing you through the streets. This cloud of death spells game-over if any one person is swallowed by it, and it’s constantly moving. This is intense because your two aforementioned options are both dangerous in different ways. Say you decide to hang back behind a wall in cover, if you’re not fast enough you could be simply swallowed by the wall of death. On the flip-side if you decide to run charging forward (as I tend to do in shooters for some reason), you could be incapacitated. If this happens you slow down the whole team who is required to resurrect you lest you be swallowed by the wall. The ability to scoot forward helps, but your scooting is at a fairly slow compared to the chaos around you. Alternatively the developers threw you another decision: There are several alley ways we encountered with a variety of perks, but one major downside. The alleys that are not the “correct” path will give you some pretty sweet weapons, ammo, or grenades. However, the time it takes to raid the stash may put you far enough behind the pack of friends that you’ll be swallowed up by the wall. If you don’t get the ammo boost, you may also find yourself against a swarm of enemies without being able to fight back. Either way there was more than one occasion where I was tempted to shout "F**king RUN!" to those around me (or my own character as he slowed down for a breather), so the mode is basically perfect for what it is trying to accomplish.

We didn’t really get to try out the boasted “Divergent co-op” experience with either of the heroes Paxton Fettel or Point Man, but I’m actually okay with that. After playing the “F**king Run!” mode, which is highly cooperative it’s difficult to imagine quite the same co-op experience if we were forced to split up at any point.

Basically I’ll wrap this up by saying: If you don’t cooperate, it’s impossible to survive. Some people were pretty frustrated with each other as people with lesser skill were matched up with those who were more experienced in shooters - so choose your survivors wisely, lest friendships will end.

Tally’s Impressions From The Show Floor:

I suppose the most powerful thing to say about my time with FEAR 3 is as I went into the interview, I had no intention on buying the game whatsoever - after my time with it, however, I'm seriously considering buying it when it comes out. I never played FEAR 1 or 2 as horror games and movies aren't really my thing. With a full-out 2-player co-op campaign along with at least one awesome co-op mode (F**king Run!), I see a lot of potential here for a truly great co-op experience. The co-op mode we had a chance to play was some seriously hard-core co-op. If one of you dies, NONE of you can win, which is pretty rare to see in a FPS title. In games like Left 4 Dead, we always try to keep all of our teammates alive, but sometimes it gets to the point where you have to take one for the team in order for your team to live. In F**king Run, that is not an option, and it's kind of glorious. I had a blast playing this mode, and I'll definitely be keeping an eye out for more information as the title gets closer to launch.