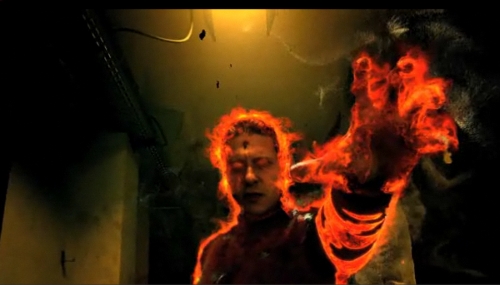 Last week we heard that F.E.A.R. 3, the latest entry in Day 1 Studio's first-person shooter/horror series F.E.A.R., would include co-op.  Not much else was revealed at the time about what that co-op experience was like, but the latest issue of Game Informer magazine has the details for us.  It seems that Day 1 Studios will be playing around with the idea of co-op some and introducing a new experience they call "divergent co-op."  This system will tie in with the game's overall story and basically means that while you'll want to trust your co-op partner and assume they're with you all the way, they may have an agenda all of their own...

In F.E.A.R. 3 players will have the option of controlling either Paxton Fettel, the antagonist in the first game, or the mysterious Point Man, the protagonist that killed Paxton.  In answer to the two questions that undoubtedly arise from that sentence: yes, Fettel is some kind of apparition/ghost with psychic powers (who can also possess almost any enemy in the game); and yes, that isn't the healthiest basis for a strong co-op relationship.  Though, that seems to be the point.  We're all used to a co-op experience where two or more players are working towards the same goal, but what if one of the players had their own agenda all along?  What if, once the final boss is down and all seems clear, they set in to motion whatever plans they had?  While it might not be the kind of co-op we're used to, it certainly sounds intriguing.

The article in Game Informer also discusses some of the other features player's can look forward to, for example, in-game reactions to Alma's birthing pains.  The article discusses how Alma's contractions and screams, the result of whatever horror she's conceived getting closer and closer to being birthed, will cause things to happen in the world.  These are referred to as "rift events" and one specific example that's provided is hearing Alma scream in pain followed by a pack of wolves suddenly appearing and attacking you.  I'll keep silent on this and just leave it open to all the husbands and wives out there to comment.

F.E.A.R. 3 is certainly shaping up to be an interesting game, from both a co-op and horror perspective, though time will tell how well both features pan out.