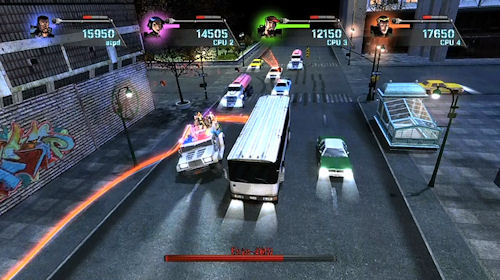 This is somewhat of a pleasant surprise.  Ghostbusters: Sanctum of Slime, the four player co-op downloadable title from Atari, will be releasing next week - March 23rd  - on XBLA, PSN and PC.  Originally slated for "Spring"  - the game is hitting that target almost right on the nose.

The story of the game puts players in the role of four new ghost bustin rookies, hired by the original team to help get an over run New York City under control.  The latest developer diary goes into detail about the game's back story, including some interesting comic style art which we assume will be present in the game's cut scenes.  Also on display in the video, and pictured above, are some driving sequences in the game that look to mix up the normal mechanics of an isometric shooter.

No price point was given yet for the game.