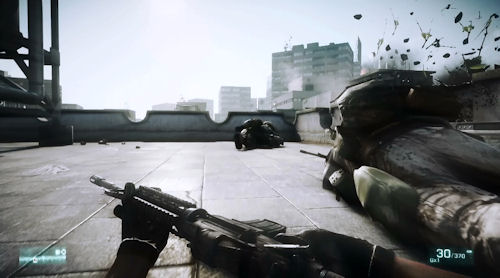 A new trailer is out this morning for Battlefield 3 that looks just as tasty as the first.  The trailer is called "Fault Line Episode 2" and follows our fireteam onto the roof of a building under fire from a hidden enemy sniper.  The tense trailer continues as our team works their way across the roof from cover to cover only to...well - I'll leave you to watch the video to see what happens.  Lets just say a lot of potted plants were harmed in the making of this video.  Oh - and one building.

Along with the great atmosphere, the video continues to show off the Frostbite 2 engine's incredible graphics technology.  Textures pop, lighting is realistic, and destruction is as convincing as it is brutal.  Battlefield 3 will feature a four player online co-op campaign that, if they can capture this kind of action in co-op, should put the game on everyone's radar.