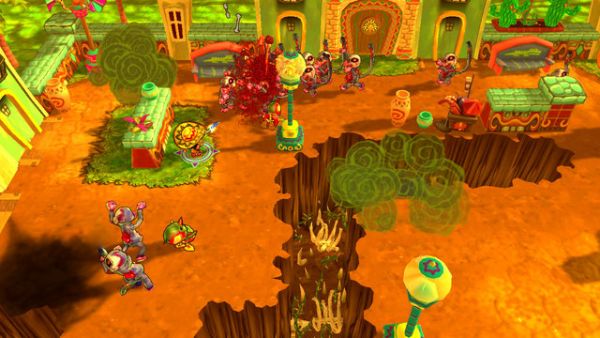 Sometimes a game is so bizarre in concept that it just immediately grabs our attention.  Animales de la Muerte has done just that, and probably grabbed the attention of PETA at the same time.  Developed by High Voltgage Software, creators of The Conduit 2, the previous Wii exclusive has been cancelled for that platform and moved over to the "next-gen" consoles and PC.

So what is Animales de la Muerte?  It's a top down shooter in which you play one of two kids with a machine gun trying to save their Uncle's Zoo from zombie-fied  animals.  Its a dark comedy with bright colorful graphics and light hearted writing combined with grotesque looking animals that are hell bent on not only eating you...but eating your brains.  I'm guessing monkeys flinging feces are the least of your problems.

On the flip side of actually killing all of these somewhat adorable animals, is actually saving the ones that haven't been turned to the undead side yet.  Plus the game has some pretty over the top cut scenes.

Like we said, the game was originally a Wii exclusive title, but after seeing the video of it in action, we're gonna guess it didn't quite fit on the console.  High Voltage agreed while talking to Eurogamer.

"We felt like it was maybe a better fit on the next gen platforms, both content-wise and gameplay-wise," studio mouthpiece Eric Stoll told Eurogamer. "We can have more enemies on screen, and it's probably a little more acceptable to have really over-the-top violence in an Xbox game than on the Wii.

There's no official release date yet for Animales de la Muerte, but we do know the game will at least have two player local co-op.  Online co-op hasn't been officially revealed yet.