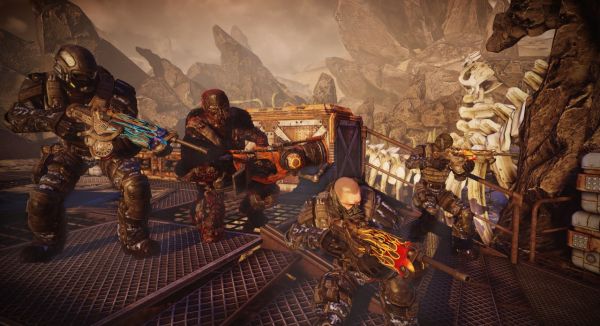 I’m pretty sure there’s never been an online multiplayer mode that forces players to cooperate as much to actually complete it as Bulletstorm’s Anarchy. While other online co-op games suggest, imply, and hand hold their way to co-op play to success, Anarchy literally makes you fail if you don’t.

Our latest co-op night for Xbox Live we took the mode for a spin with the “general public” of Microsoft’s service. While this would normally be a death sentence, for me, it just further solidified how much more mature co-op gamers are than say - your average Call of Duty versus player. Our first match began with Andrew and I joining up with two other folks - Andrew suggested we choose Dead Rock for its tornado and how we can utilize it for skill shots.

The way it worked is you need to position players around the outside of the tornado, one or two up top and one or two towards the bottom. As enemies attacked us, we’d kick them up in the air and call out their locations, something that was almost akin to skeet shooting. “On up high, two down low.”

Leash them through there after a team mate kicks em for maximum pointage...

After this, the players on the opposite sides would then leash and pull the stasis kicked enemy through the tornado yielding team skill shots - Yoink (75 skill points), Not in Kansas (200), and Shocker (150). If we hooked a quick enemy we could also pick up a Gotcha (50). For an added bonus we could Flail Gun an enemy for a additional Sadist (100). The resulting 425 to 575 points were doubled because they were team kills. So now we were hitting 850 to 1050 a kill when everyone was on the same page. It wasn’t long before we were earning 15,000 or 20,000 points a wave even with a requirement of 7500 or 8000 to complete it.

Teamwork was critical here, and at times we looked like a bunch of Ghostbusters with our streams crossing, but in the end, we persevered and powered through 20 levels.

Later on in the night I jumped between a few other quick matches, and this kind of comradely was still prevalent. Players communicated, called out what they can do for skill shots and who can play what part in them. In all the matches I played not a single person tried to go Rambo, it was a pleasant surprise and made for a really rewarding experience.

Bulletstorm Co-Op Night was upon us. I was finishing off some Echo Achievements when Nick sent me the invite. I joined the game lobby and was greeted with guffaws. “Have you been playing anything else?” came from the laughing duo. My response was something lame like, “Wait until you see how cool I look!” Like many multiplayer games, a player’s level appears on the game lobby screen. Nick and our co-op partner had leveled up into the teens, classified as either Rookies or Grunts. I’m already maxed out at level 65, classified as Final Echo, and I am mighty. (I really like me some Anarchy mode!)

Each new XP level attained in Bulletstorm’s Anarchy mode rewards you with new aesthetic items for your character. Nick and our guest looked adequate enough in their standard military garb. I happened to be rolling a smooth Lowrider PMC, Phantom Helmet, Redrum Armor, and Devil Boots. At one point in the match someone mentioned that they had unlocked the “Flamingo” PMC. Well, I’m sure you’re excited about your new pretty pink gun, but I’m rocking a frickin’ invisible head!

I sent an invite to a level 50 player because I didn’t want General Serrano (the game’s antagonist) telling us how much we suck the whole match. (He jaws at you throughout Anarchy mode whether you’re doing well or not. His banter ranges from horrifically jubilant to joyfully perverse.) I really had no fears, BAPenguin always brings his ‘A’ game, heck, even his ‘C’ game is better than most. Our second guest joined up, and sure enough, he had an invisible head, too. Dammit. As Nick said earlier, the first thing I suggested was going to Dead Rock. Each arena in Bulletstorm is a character unto itself, and Dead Rock is the meatiest. There’s a beautiful sunset, cool dinosaur bones, plant life a-plenty, and a nice overlook. It also has a giant whirling electrified death tornado of doom. That’s right, a DEATH TORNADO of DOOOOM! Seriously, I think there’s a bus floating around in there. I let everyone in on the Skillshot technique that Nick has already mentioned. I had several tips for how to best execute Team Challenges, because that’s how you make the big bucks. Nick mentioned that I should write a Bulletstorm strategy guide, to which I responded “Everything I need to know about Bulletstorm I learned from Youtube.”

I have never played a game that requires teamwork and communication for success as much as Bulletstorm. You can’t rely on one good player to go Lone Wolf and meet the required scores in later Anarchy Waves. Simple survival will not advance your progress. You have to orchestrate some pretty spectacular kills to get enough points to move on to the next wave. You can also constantly change your weapon load out, since different guns give you different Skillshots, and you get a bonus for performing new skills.

After a riotous comp-stomping with Nick and our guests I had to take a break. I played later in the evening (much later) and I couldn’t find three other gamers who had their mics on. Players would run up to enemies, shoot them twenty times in the torso, and walk away with 10 points. You cannot get out of the early rounds without proper communication. A good team kill takes time to set up, but if Joe Headshot crashes the party you’re looking at fifty points instead of a thousand.

This is my only real gripe with Bulletstorm’s Anarchy Mode: Once you play it with four good players who communicate well together, normal random games with un-mic’ed players become unplayable. Communication actually becomes more important than skill. When done right, Bulletstorm’s Anarchy mode is an incredibly rewarding co-op experience.