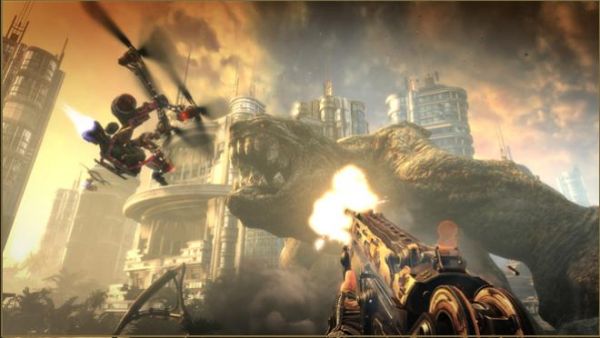 It's called a Hekaton, and it frick'n hates you.

Bulletstorm has a lot of the staff here at Co-Optimus pretty excited.  Imagine our joy when we heard that Bulletstorm will have a demo available almost a full month before the game's retail release.  The demo will be available January 25th on the PlayStation Network and Xbox LIVE Arcade.  No word yet on a PC demo.

Details on the demo come from G4tv.com:

Hero Grayson Hunt will make his way through a ruined building giving you a chance to test out the "Echo" multiplayer mode in which players run through story-mode levels in the game again after completing them, in order to earn a higher score. You'll have 45 skillshots at your disposal to help you out. Playing the demo will also unlock unique optimizations which can be used in the Anarchy mode of the full game later, when it comes out

According to People Can Fly's developer blog, "Echo," or "Echoes" mode, is a score attack mode where you "Score the highest possible amount of points on a map and then compare your score to your friend’s or to the best players in the world."  Sounds like your basic online scoreboard, but if Bulletstorm's "Kill with Skill" gameplay is as fun as it looks, convincing gamers to replay levels won't be a problem.

Another entry in their developer blog, titled "Never Trust Strangers," details some of the features of "Anarchy" mode, Bulletstorm's four player online co-op mode.   The blog goes on to say:

Killing is easy, winning is hard.

Blasting through wave after wave of enemies isn't enough to advance.  Players must achieve a certain score to move on.  You need to work together to get Team Skillshots, which will give you the most bang for your buck.

For example, the Single Player Skillshot “Bullet Kick” requires you to kick an enemy to send him flying and then shoot him to death before he lands. If you do that in Multiplayer you’ll get the regular 25 points. But if you team up with someone and one player kicks him and the other player kills him, you both get “TEAM Bullet Kick” so you both get points!

"Anarchy" mode can be played with one to four players.  If you start a game with only two players, other people can join in, even in later waves.  If you start a private match with less than a full team, friends can still join you, once again, even in the middle of a match.

We also have a new video showcasing the game's weapons as well as some of the mayhem which will occur in the game's Anarchy co-op mode.  The skillshot system combined with co-op seems to open up a lot of new gameplay mechanics.

The more we hear about Bulletstorm the more we like it.  That February 22 release date can't come soon enough.  At least we have a demo coming in eleven days.  Then most of our questions should be answered.