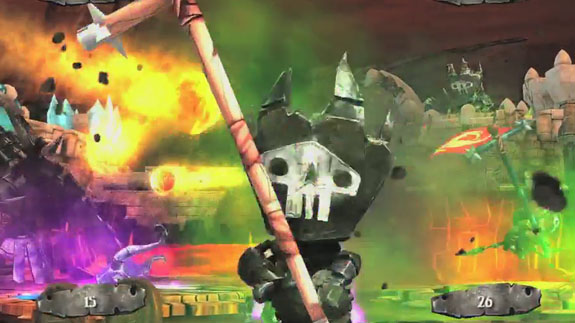 If you were of gaming age in the early 1980s, you probably had an Atari 2600, or knew someone who did.  And, chances are, you played one of the best titles for that system: Warlords.  Though originally an arcade game, the port was far more well-known and successful, and is generally regarded as one of the best games for Atari's vintage console.  Throughout the years, several remakes have been made, including an XBLA version a few years ago.  But through the years, Warlords has always been a competitive experience.

Until now, or more precisely, this summer.  A "reimagining" of the original classic is coming this summer to XBLA and PSN.  Still titled Warlords, the game will include, for the first time, cooperative modes.  One of these is Seige mode.  No description yet of how exactly the co-op works, though four player co-op or competitive play is promised.  We've got the official announcement trailer for you below, and we'll definitely keep Billy's eye on this one as more co-op details are released.