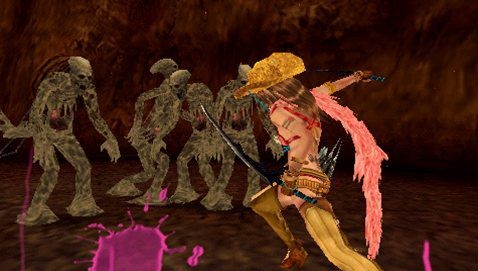 It's not often we cover games that have only been released in Japan, but in this case, we'll make an exception. The Onechanbara series made it to American shores in 2009, with releases for Xbox 360 and, oddly enough, Wii.  The formula for Onechanbara seems to be tough girls skimpy outfits zombies cool moves co-op - your brain.  Our review of the 360 release didn't pull any punches: it wasn't very good.  Still, there must be a market for cowgirls in bikinis wielding swords to decapitate the undead, and so D3 published Onechanbara Special for PSP.

Co-op is be included, using the ad hoc capabilities of the Playstation Portable.  Though it's currently a Japan-only release, you never can tell when a game might make it stateside.  We've got the cheese-a-rif-ic trailer for you to check out; maybe it will sate your hunger for pink blood.  You know, if you had such a hunger to begin with.