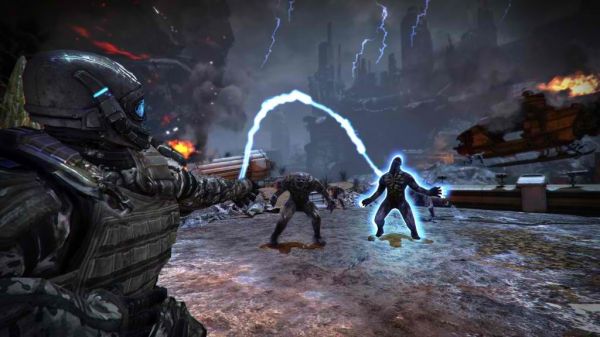 Bulletstorm's new DLC launches today.  Titled "Gun Sonata," the new content has two new Echoes Mode maps and three new Anarchy Mode maps.  There are also two new leash colors for your customization pleasure, "Flamingo," and "Pulp."  We liked Bulletstorm when it was released a few months ago, giving it a 4 out of 5 in our Co-Op Review.  Is the new DLC fresh enough to merit 800 Microsoft Points, or $9.99?  Read on and find out.

Echoes Mode lets you replay portions of the single player campaign and compete for a high score against your friends.  I ran through all of the Echoes Mode maps in the original Bulletstorm, plus the extra Echoes that came from the pre-order.  They really didn't do much for me, until I watched some YouTube videos and decided to go Big Score Hunting myself.  The two new Echoes maps are actually not from  the campaign. They're entirely new areas.  You can almost consider them deleted scenes. "Guns of Stygia" takes place on a cliff side and is reminiscent of an earlier echo, "The Hideout."  "Crash Site" takes place in the wreckage of the Ulysses and surrounding buildings.  If you just have to have a higher Echoes score, these maps are good for at least 10k a pop. I two-starred both of them on my first run through, and I'm sure I'll go back for the third.  They take about six minutes each, so they're just as long as the other Echoes. Neither appears to be a Skill Shot bonanza like "The Collapsed Building" Echo, but there are plenty of environmental hazards to be found.

If you liked Anarchy, the four player co-operative mode, you're in luck.  There are three new maps available. Titled "Sewers," "Hotel Elysium," and "Villa," each of these maps have their own look and feel, along with specialized skill shots. (Bidet, Pound-Cake, and Dung, to name a few.)  It takes about two hours to win a full match of Anarchy Mode, so you're looking at about six hours of content here, if you only play each map once.  If you thoroughly enjoy Anarchy Mode, and appreciate the skill and timing it takes to execute perfect Skill Shots, you'll enjoy these maps.  If you run around head-shotting everything, well, you probably got sick of Bulletstorm half way through the demo. The new leash colors are pure window dressing.  "Flamingo" is, you guessed it, pink; while "Pulp" is a pulsating black and yellow affair. I would have liked some more customization options, or a level cap increase, (Yes, I capped out in Bulletstorm.  I'm a fan.)

If you can't get enough Skill Shots, this DLC will provide your fix, but there's nothing here to bring you back if you've moved on.  Only big Bulletstorm fans need apply.  Looks like you'll still be holding onto that disc until the Gears of War 3 beta starts next week.

*On a side note, the screenshots in the attached gallery are from VG247.com.  I played Bulletstorm and the Gun Sonata DLC pretty darn thoroughly and I didn't see some of the areas.  I don't know if some of these (most notably the Mini-City with the Mechaton and the Monorail Factory) are leaked upcoming DLCs,or simple renderings.  It's always possible I just missed them (but I doubt it). We'll update accordingly.