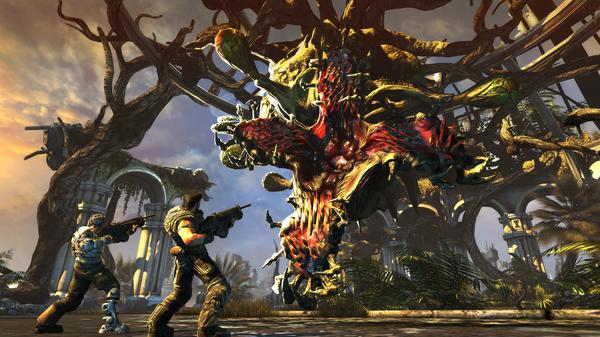 Being a Cliff Bleszinski project we were wondering where the co-op for BulletStorm was when the game was announced. It turns out it was just sitting aside, waiting to be unveiled for the co-op loving gaming community. In an interview with Cliffy B., PlaystationBlog.com covers the details on this exciting new development.

BulletStorm is a bit of a trend breaker in the realm of violent shooter video games. For one thing, it won't be featuring a versus mode - instead, it will be utilizing a style similar (but not identical to) to Epic Games Gears of War 2's Horde Mode. This mode in the world of storming bullets, is called Anarchy.

Anarchy will have players working together to not only survive, but to achieve a certain score to progress through the waves of enemies.  Not only will players have their own skill shots at their disposal, but cooperative skill shots as well.

To get a better look at what Anarchy is, complete with Cliff Bleszinski commentary, check out the video below and rejoice! For there is ultra-violent co-op on the way. (Beware, There is no split-screen planned for local players, sorry peoples!)