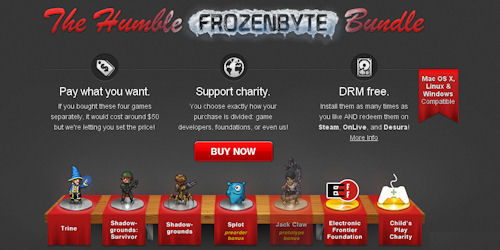 The Humble Indie Bundle was first released last year as an experiment of sorts.  A few independent PC developers got together and released their games, DRM free, for a name your price sale that not only supported them - but various charities like Child's Play.  A second bundle was released a few months later continuing the tradition and success, but today marks the first time that a publisher has gotten on board with the unique approach.

FrozenByte is offering up a chunk of their catalog and you get to name your own price.  The bundle includes several co-op titles - Trine, Shadowgrounds: Survivor and Shadowgrounds.  Also included is pre-order for a platformer called Splot and the source code for an unfinished game called Jack Claw.  Not a bad packaged deal.

Again - you name your price and decide who gets what percentage of what you pay.  Charities include Child's Play and the Electronic Frontier Foundation.  The average purchase price for the $50 estimate value of games is about $5.  All the games are DRM free and can be redeemed on Steam, OnLive and Desura.

So head on over to www.humblebundle.com and purchase an awesome pack of games and support a charity and small developers in the process!