When developer Arrowhead Games revealed that their first piece of premium DLC would be a Vietnam War themed pack of content - most of the gaming world couldn't believe it.  But anyone who has played the game knows, its exactly what to expect in the world of Magicka.

Magicka: Vietnam adds two maps - 1 scenario challenge map and 1 survival challenge map.  Both are playable in four player co-op and both carry the Vietnam War theme.  In addition to new models, weapons (guns), and music - there's a few new surprises like the napalm spell and victory grenade that goes along with the new character model toting a helmet and an American flag. 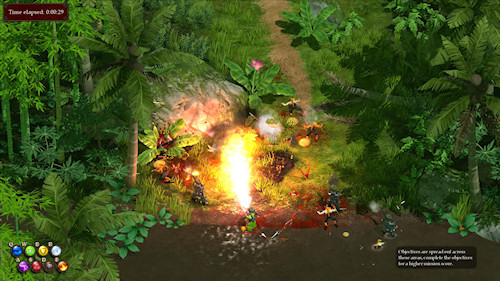 The scenario map is the meat of the DLC and it features a multi-staged level with numerous objectives to complete.  Players need to rescue prisoners, destroy radio towers, blow up ammo storage facilities and of course - make it out alive.  You are graded not only on completing these, but how fast you complete the mission.

Because of the focus on bullet firing weapons, we found this map to be quite a challenge.  The enemies come at you fast and furious and you'll need to dodge bullets quickly.  Thankfully your shield isn't the only defense, Arrowhead added a cover mechanic when holding a gun.  Speaking of guns, there's a lot to pick up.  Everything from rifles, machine guns, rocket launchers and sub machine guns.

There is an inherent problem with such a focus on guns though now - team damage becomes more of a problem than in the past.  While the variety of spells and team kills they caused were funny in the base game, the machine gun damage is a bit annoying at times if you aren't careful.

Like the main game's missions, the challenge mission isn't save-able midway through.  This adds to the difficulty.  All that said - the style, variety, and sheer hilarity of the pack is top notch and our crew had a ton of fun working through what we could of the mission. 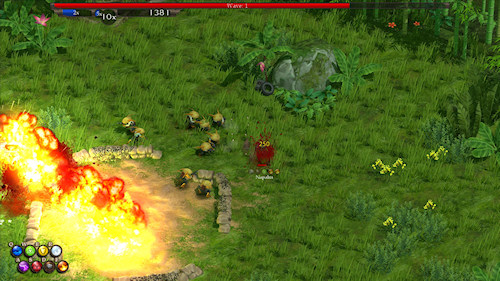 On the survival side you have a pretty small map with some sand bags you can crouch behind.  Most of the weapons and enemies of the scenario map are present here and you still have the Napalm at your disposal.

For $5, Magicka: Vietnam is a solid and entertaining piece of DLC.  Something like this seems like the perfect fit for extra content, its entirely optional, and its something fans will appreciate.