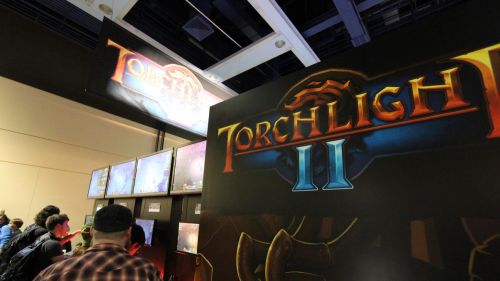 September 20th, 2012.  Torchlight 2 finally has a release date thanks to a big announcement by developer Runic Games at PAX.  They definitely didn't want you to forget it as it was plastered all over their booth on the show floor.  With the game's release imminent, we sat down and played through a near final build of Act 2 in the game.

Myself, I chose an Embermage. We we're given preset character that were already leveled up a bit since our demo was partway through the game, but as soon as I brought up the skill tree it was apparent something has changed.  Skills are now laid out in a more grid like pattern and each skill has bonuses depending on how many points you put into them. The level we played started in the desert, but as we battled through numerous enemies, the landscape changed and the game's dynamic weather and day and night system really added to the variety.  Not only that the landscape itself took on new dynamics with rocky structures, sci-fi like glowing crystals, and eventually caverns to enter.

It was here we found our main quest - entering the den of the Manticore.  By this point Locke and myself were well warmed up to the game and ready for our first boss battle.  Needless to say, it was a satisfying victory.

Let me just begin with saying that I enjoyed Diablo 3, but it is missing something that Torchlight 2 has - heart. Playing it at PAX this year affirmed my excitement as we sampled a bit of Act 2 in our short time at the Runic Games booth.

Be it the writing or the art style, Torchlight 2 is dripping with charm. I feel bad for clicking on the enemies because they are wonderfully designed. The world makes you want to explore, instead of race to the next goal so you can claim your prize. Speaking of loot, there is a TON of it. You would think that you couldn't get more loot than Diablo 3 or Borderlands 2 but I was constantly sending back my pet to get rid of all the (great) items I didn't need anymore.

I was playing as the Outlander, the gunslinger who can move with ease and take down foes using pistols, rifles, shotguns, and blunderbusses. The skills that were set on the pre-designed character were cool as I could swap between entangling enemies or dishing out massive amounts of damage with rapid-fire. I don't usually play as this type of class (I was a Destroyer in the first game) but it was awesome to try something new and feel each skill was unique and made a difference on screen.

I'm not certain what else to share with you because I can recommend Torchlight 2 to everyone. If you were disappointed with Diablo 3, then you're going to get something closer to Diablo 2. If you really liked Diablo 3, Torchlight 2 offers something with a little more soul. In any case, grab it when it comes out on September 20th because everyone deserves to play this game.