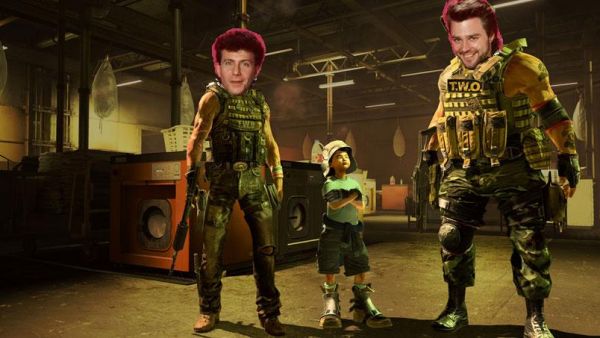 Yup. That's what I'm talking about.

ANDREW Recently, Jim and I got together for a session of Army of Two: The 40th Day.  As is the case with most gaming fathers, life eventually interceded.  Most of my co-op partners don't know it, but I play with my mic muted for 75% of the time.  Or maybe they do know it, but they're too polite to say anything.  This is a brief example of how my gaming sessions usually go.  Since I didn't take notes and my memory is horrible, everything that follows may not be a factual representation of the events that transpired.

Me (Mic on): Alright.  I've got a SAW and a full auto-shotgun.  I'm just going to spray and pray from a distance while you go in a kill up all the bad guys.

Jim: Sounds good to me.

Jim:  Okay, the bad guys have hostages and we have to save them. How do you want to handle it -wait, who's shooting?

Jim:  Well, we lost the hostages.

Me (Mic on): Yeah, I don't know what happened.  Damn terrorists.

Me (Mic off) (baby talk): Real-Really?  You're just going to throw that on the ground?  You fuss all day for it and when I finally give it to you you're just going to -oh, okay.  I see how you are.  You think this is funny?  Are you just laughing at daddy now?  Am I a funny guy?  In what ways am I funny?  Aww, who's my baby girl?  Who's a precious? Who's my little baby?  Baby-baby-baby!

Me (Mic on): I don't know. That guy came out of nowhere! -ROCKY AND ZELDA!  I will kick your pug butts unless you stay outside!

It went on like this for about five to ten minutes, and then our kids had had enough.  We then said our farewells and went back to being awesome dads.  For those of you wondering, my daughter sits with her back to the screen in a high chair when I play, and I mute the TV if there's harsh language.  When I say baby-baby-baby I sing it like James Brown.  I have never hurt my pugs.  I keep on threatening them, but they keep calling my bluff.  I hope my daughter will be mature enough for Gears of War 3.  As you can see, I'm already training her: You better be dual wielding two of those Lancers by September, sweetheart.

JIM  Ah, the Army of Two. -Can eradicate thirty armed soldiers while ducking and weaving among the crevices of a falling skyscraper. -Can leap clear over the carcasses of dead hippos. -Can lock armor and become an invincible duo with unlimited ammo, one-handedly spewing rounds with better accuracy than Clint Eastwood on his best day. -Can even carry three heavy weapons and still have a hand free to play rock, paper, scissors. Yes, sir.

But alas...despite their incredible strengths they have two fatal flaws: heavy doors, and children. That’s right; these two rugged behemoths can pull a headshot from a moving crane platform, but the squawk of a hungry child will stop them in their size-14 tracks. Superman has a new Kryptonite, and its name is “infant”.

I’m referring, of course, to the un-ignorable distraction that a gaming father experiences when his offspring requires attention. Andrew and I had intended to go on and on about how I judo-kneed a man’s head completely off, or how he learned the hard way that a bullet will pass through a bad guy’s head and kill the innocent woman who had trusted him to know better. We wanted to described our giraffe-print HK416 and gold-plated M249 SAW. What seems to have stayed the most prevalent in our memories, however, was having to engage in side missions to quell the wails of hungry babies whose naps were finished.