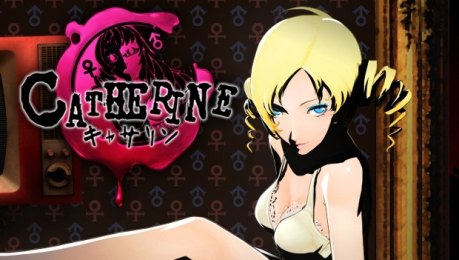 It looks like the survival horror puzzle platformer (try saying that ten-times-fast) simply titled Catherine is going to offer a co-op mode of sorts. Our early reports are pretty vague, but it looks like completing the game will unlock a colosseum mode where you and a friend work together against the forces of the Catherine Universe.

"The game will feature multiple endings as well as co-op multiplayer modes called ‘Escape With or From a Friend’."

It seems like a game like this would require some local co-op discussion to complete gauntlet puzzles like the ones shown in the trailer, so we're assuming 2 player split-screen so far. We'll let you know as soon as we learn more.

As previously mentioned, the details on the co-op are pretty sketchy so far, but when you look at the trailer we've got for you it's not hard to see why. The premise of Catherine is, how you say? Weird. And there are sheep. Or rams? I guess in Japan they count Rams in order to fall asleep.

Amazon.com has the release date for Catherine listed as July 26th for the North American audience on both Xbox 360 and Playstation 3. As of right now, the game has been out in Japan for some months now. If there is anyone in the audience that can accurately translate a Japanese site discussing the co-op, we'd really appreciate the tip and info on what they saw from Catherine co-op. Of course, the game will likely see some changes for the North American release, so we won't hold it against you if information changes.