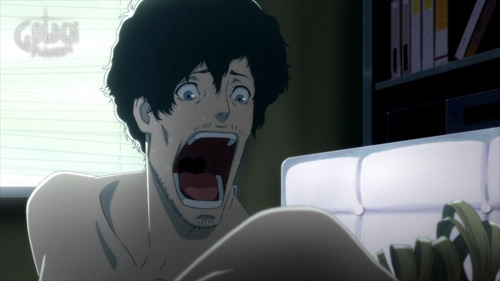 Vincent's jaw is not unlike a snake's - he can unhinge it to consume his prey.

A while back, we learned that Atlus' upcoming block puzzler/affair sim mashup, Catherine was going to have co-op, which really surprised everyone here. Upon reflection, I suppose we shouldn't be too surprised, when a couple goes through rough times, don't we cooperate to try and mend the relationship?

In any case, Atlus was kind enough to give us a presentation of Catherine and while it mostly focused on the single-player content, we got our eyes on a pair of multiplayer modes, including the elusive cooperative mode known as Babel.

For those not in the know, Catherine's core gameplay mechanic is based around climbing a huge tower of blocks while the world crumbles beneath you, and it's up to you to rearrange said blocks to assist you. While most might roll their eyes at the thought of a game centered entirely around pushing blocks, the addition of a time limit and enemies trying to stymie your efforts will definitely spice things up a bit.

In any case, two multiplayer modes were revealed to us: Colosseum and Babel.

Colosseum takes the standard gameplay mode from the campaign, adds in a second player, and you race to the finish while trying to arrange blocks in a way that prevents your nemesis from completing their ascent. It's ripe for griefing and looked like a fair bit of fun.  Unfortunately, this mode only unlocks once you've completed the storyline once (a feat which Atlus claims will take anywhere from 8-14 hours depending on how much of a completist you are and how good you are at solving puzzles).

Babel is a challenge mode for two players, and the gameplay appeared exactly the same as in Colosseum, with the exception that your goal is to get both players to the top of the tower. This takes a considerable amount of thought, since you can definitely arrange the towers in a way that someone cannot proceed. Communication will definitely be vital, but that won't be an issue, since both of these modes are strictly a couch co-op affair. (See what I did there?)

We were told that Babel mode will unlock over time as you progress through the game, so if you get stumped by the solo content, you can still experience the co-op.