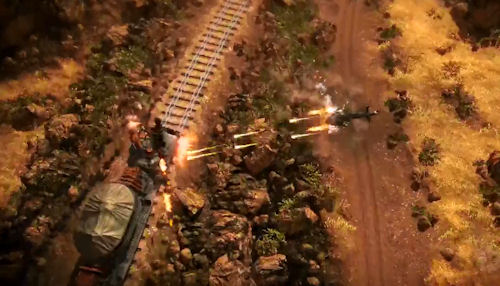 Its been some time since Sega announced Renegade Ops, a digital download title on the PC, 360, and PS3 from Just Cause 2 developer Avalance Studios.  Today though we finally have some details about the game as well as the first gameplay footage.

Renegade Ops actually came about as the developer tried playing Just Cause in a top down format.  After watching the video its easy to see where all the over the top action of that series has influenced this new IP.  Players take control of various vehicles like jeeps, tanks and helicopters and wreak havoc on anything in their path in glorious fashion.  The team wanted a Hollywood feel that would make a Michael Bay movie jealous.

The game will feature a story that is played out in comic book style cut scenes in between missions and the entire game can be enjoyed in four player online co-op with some friends.  Details are still scarce as to how that will play out - its unclear if players can drive different vehicles at different times.  All I know is those helicopter scenes remind me a lot of Desert Strike and Jungle Strike on the Sega Genesis.  And that's a good thing.

Renegade Ops will be out later this year.