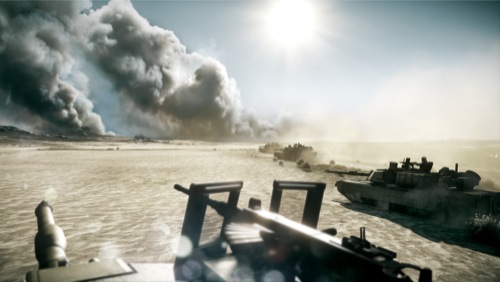 E3 2011 has brought us some goodies from DICE's upcoming Battlefield 3.  The single player, co-op and versus game was in full effect at the show, with a video unveiling of "Operation Thunder" at EA's press conference.  We've posted that video below - and yes - that's what it looks like in game.  The video follows a tank column on an assault of an enemy compound when they are suddenly intercepted by an enemy tank formation.  Things go boom.

The other big reveal at E3 was for the game's versus mode - and character classes.  Battlefield 3 will support four classes: Engineer, Medic, Support and Recon.  Each class was designed to be utilized for team play and co-op play, filling a specific role in a squad of four.

We were given a brief demo for a multiplayer map after being introduced to the classes, once again DICE wanted to stress the game's engine and its importance.  FrostBite 2 brings slick player animations, explosive environments and a renewed focus on audio - something that has always been impressive in the Battlefield series.

The map we were shown was a "Rush" map - which had players tasked with taking successive areas to a common goal - in this case the French financial district in Paris.  The really slick thing about this map is that despite a beautiful beginning in a park, the battle quickly went underground into a subway and then into a densely urban like area.

Most of my time playing was as the support or recon class both of which I found enjoyable.  The weapons felt solid, and the kills were rewarding.  One interesting aspect is the new suppression system in the game, its a dynamic behind the scenes thing that occurs as your soldier is under fire.  While you can hide behind cover and avoid bullets, the longer you are suppressed the less battle efficient you become.  Another change are for vehicles - which can now regenerate armor if they aren't too damaged.

As I've said, the game is absolutely beautiful in motion, and I fully expect it to bring our gaming PCs to our knees.

DICE wouldn't give any details on co-op yet, other than there will be "co-op modes."  The bit I played of the game gives me high hopes for the pedigree of the rest of the game.