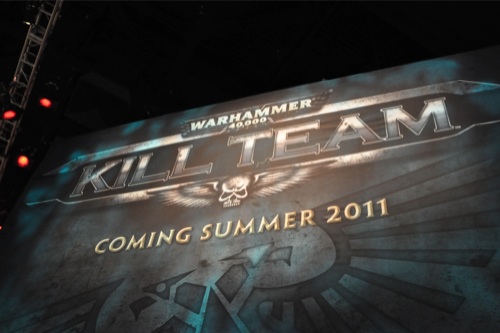 As a twin stick shooter fan and as a Warhammer 40K fan, it's hard not to be excited for the upcoming game Warhammer 40,000: Kill Team. Combining these two things players are put in control of one of four different characters Sternguard Veteran, Techmarine, Vanguard Veteran and Librarian. The classes all have base starting points and their own unique special attacks.

During my co-op playthrough with one of the game's developers I chose to play as the Librarian. His special attack, mapped to the LB button on the 360, creates a giant whirlpool like energy field that explodes killing the Orks around it. My partners was a Techmarine who was able to ramp up his bullet output.

The game was easy to pick up and play and controlled pretty much like you'd expect, moving with the left analog stick and shooting with the right. Where the game differentiates itself from other twin stick shooters is your melee abilities which let you rip through Orks using a sword, chainsword or other weapons. Nothing is more satisfying than getting swarmed by a group of Orks only to unleash broad melee strikes against bad guys and watch them explode into red goo.

The mission I played looked like it took place in a factory of some sorts and it wasn't just all run and gun. Simple environmental puzzles broke up the monotony for us. There were also power ups to collect that boosted health and firepower and standing near your co-op partner while these power ups are active would give them the same boost - this was especially useful for healing.

At certain points during the missions you are given the option to upgrade your character by slotting in abilities like damage boost, health boost, and others in three separate slots. You can also upgrade your weapon or switch it out at these resupply areas.

Its no surprise that I had a blast playing Warhammer 40,000: Kill Team.  The game only supports local co-op, no online play, so that's a bit of a bummer.  If there was another disappointing thing, the game may have lacked a little graphical polish, something I'm not sure it can acquire in its month till release. Its a simple thing to overlook in all the chaos of slaughtering those pesky Orks - it just brings a smile to my face.

Warhammer 40,000: Kill Team will be out on Xbox Live Arcade and the PlayStation Network later this summer with two player local co-op.