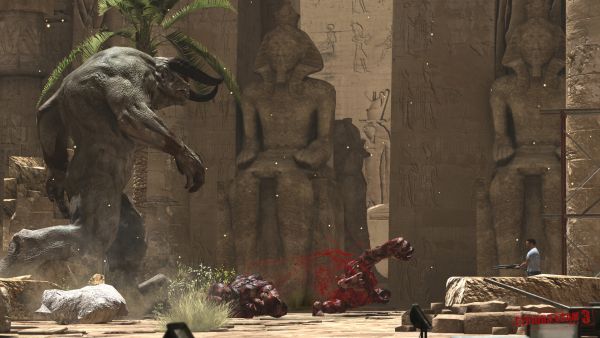 I got to spend a few minutes of hands on time with Serious Sam 3: BFE at E3 2011.  The game is still in its alpha stage so a lot of polish was missing, but the build did plenty to convey the direction the game and series is going.  That's not to say its going to stray off its beaten path, but rather, there's some new features that might sound a bit off to fans of the series.

The two biggest additions are without a doubt iron sights and melee attacks.  While iron sights aren't available on every weapon, it does play a crucial part for weapons like the assault rifle.  At first thought I'd thought this would detract from the fast paced, arcade nature of the game.  But before long I was using iron sights every chance I got to pick off suicide guys at a distance.  It just felt natural.

Melee attacks come two fold.  You can use your bare hands and attack enemies with specific melee kills for each type of bad guy.  For instance by pressing a button at the right moment when a Gnaar charges, you can rip out their eyeball.  Ouch!  The other half to the melee puzzle is actually picking up a melee weapon like a sledge hammer.  Using this you can dispatch a single enemy with a thump or swing it to find secret paths in the environment by knocking down walls. While not all objects in the game are destructible I saw plenty of things crumble because of a misplaced rocket or giant cannonball.  I took out an entire Egyptian temple save for a few walls using this method.

Even in this early stage, the game is graphically impressive using Croteam's new Serious Engine 3.  There are huge draw distances, excellent texture detail, and plenty of particle effects on display.  Perhaps the most under rated aspect I saw was actually enemy animation which seemed particularly smooth on the larger creatures.

All in all Serious Sam 3: BFE felt like a Sam game for the modern age.  The one liners are back, the crazy weapons are back, and the insane amount of bad guys are making their return.  Serious Sam 3 is inheriting the 16 player co-op mode from the recent Serious Sam HD: The Second Encounter.  The developer promised us drop-in and drop-out support with enemy scaling as well as optional friendly fire.  It should be an absolute blast - especially watching Sam's running around ripping the eyeballs out of everything!

The game is set for a release later this year on PC downloadable platforms with a retail release to follow. As a little bonus, after my E3 demo of SS3: BFE I got to check out Serious Sam: Double D and chat with its developer, Nathan Fouts of Mommy's Best Games, about the unique title he is working on.  This hand drawn side scroller is going to impress a lot of folks when it releases on both PC and hopefully XBLA along side Sam 3.  Not only are most of Sam's iconic enemies and weapons in the game - but plenty of new ones like evil monkeys with rocket legs and battle axes and ferocious pancakes with fork legs and vuvuzelas.  Seriously - these are some unique and wicked enemies.

There's a few other stand out features in the title.  The first is the game's body piling system - instead of corpses disappearing, they actually stack on each other.  In certain situations Sam might actually have to kill enough enemies to stand on to reach ledges.  The other feature is the weapon stacking function which allows you to build stacks of weapons that you can fire at once.  Perhaps you want a gun that has the shotgun, machine gun, and missile launcher on it and fires all at once.  Yeah - you can do that.  You can even find multiple "copies" of guns in hidden areas to build unique combos. While Serious Sam: Double D doesn't have co-op it's looking to be a must play experience for fans of the series or for fans of side scrollers in general.  It really looked and felt like a "next-gen" game.  Mommy's Best Games are famous for their unique art style, settings, and quality products in games like Weapon of Choice and Shoot 1UP, so really Serious Sam: Double D shouldn't come as a surprise to anyone.  I know I plan to be there day 1 with weapons stacked and pancakes in my sights.