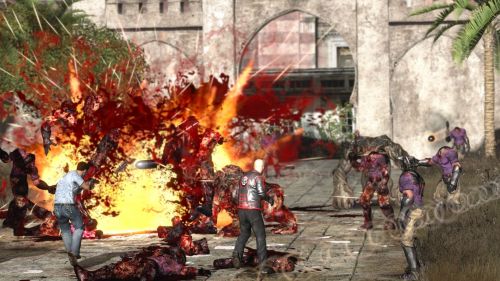 Everyone knew that Serious Sam 3: BFE was eventually going to make an appearance on the Xbox 360, but we didn't known it was bringing a friend. That's right, Serious Sam: Double D XXL is coming to Xbox Live this fall, and it will include a two player local co-op mode.

Both SS3:BFE and SS:DDXXL are storming the XBLA. For those of you who don't know (you should be ashamed of yourselves), BFE is an old-school-style first person shooter. It debuted on PC last year and we gave it a 4 out of 5 in our Co-Op Review. It featured four player local co-op (on PC!) and a whopping 16 players could play the game cooperatively online.

I contacted Serious Sam publisher Devolver Digital via Twitter to find out if the player count would be as impressive in the XBLA version. They said, "Most likely less than 16-players but that is still in the works." That isn't too surprising. The 360 is getting on in years, so they have to optimize what they can. Personally, I'm hoping for local, online, and combo co-op for a minimum of four players. We'll let you know when we get the details. Here's a little Serious Sam 3: BFE launch trailer to whet your appetite. Warning: It's full of bloody chunks.

Got it? Good. Wild man Huff must have done something right, because he's teaming up with Sam as his co-op partner. I'm not kidding. That looks like a flame thrower stacked on top of a beehive-shotgun on top of a -I don't know what that green one that is -maybe some sort of probe-u-later? I'll stick with the chainsaw/cannon/rocket launcher, thanks.

Serious Sam: Double D XXL will not only have two player local co-op, it will also include new "Gunstacker" upgrades, new campaign and challenge missions, as well as new, upgraded enemies. You can see screenshots of the local co-op mode in action in the gallery below. Watch out for the kitty.

We'll let you know all the co-op details in the months a head. You can expect both Serious Sam 3: BFE and Serious Sam: Double D XXL this fall. They better be awesome.