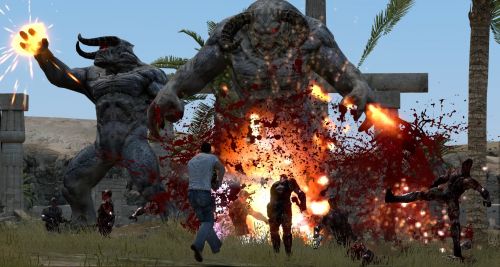 Serious Sam 3: BFE is getting some new missions via DLC. The new content is titled "Jewel of the Nile," and it will be available this October on the PC. The missions are set during the BFE storyline, and follow the Serious One as he attempts to procure a "powerful artifact" which will aid humanity in their struggle against the alien onslaught.

Three new missions will take Sam to the Temple of Isis where he'll find new enemies, new weapons, and more deathmetal-fueled action, (which really is the best kind of action). The Temple is located on the island of Philae, which will hopefully offer a change in scenery. This might not be the case, since the screenshots below seem to keep with the whole desert minimalist vibe from BFE. I can dig it. The landscape is my canvas and exploded alien guts are my medium.

The "Jewel of the Nile" content doesn't have a specific price or date yet, but we'll keep you posted. Croteam and Devolver Digital didn't mention anything about co-op, but since these missions are "set within the story of Serious Sam 3: BFE," we're pretty sure the 16 player online co-op and four player local co-op will be available.