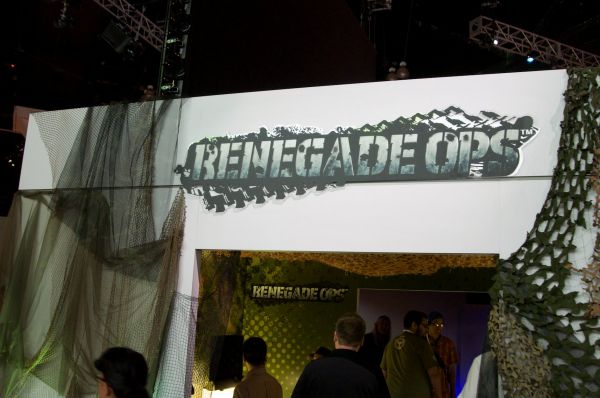 Finding a new arcade game with dual-stick shooter controls, various classes, and four player online/two player split screen local co-op is always a huge treat for this gamer. In the case of Renegade Ops at E3 from Sega, this happened. I sat in a tiny room with four T.V.s set up to play this military vehicle dual-stick shooter game, complete with four very unique vehicles and a bit of competitive c-op.

Renegade Ops puts you in the driver seat of one of four military vehicles, each with different abilities. One has a better machine gun than the others, one has more armor, another with an EMP strike ability, and the final vehicle set with rocket blasts. Each of the military vehicles has a unique driver, and an advantage over the enemy called “The Inferno.” I played as the tanking, uh, tank (Armand), through the brief demo. Each area has waves of enemies to defeat, as well as a few objectives to complete (Ours was picking up prisoners and delivering to a safe house of sorts).

Renegade Ops promises to have a heavy story presence in this rich world, though I wasn’t exposed to any of the actual characters or dialog in the hands-on demo time. Instead what I saw was some very smooth controls, brilliant graphics, and a wide range of areas to explore. Objectives were clearly marked on the screen, which helped keep the team together in the same place to minimize the requirement to communicate (though I’d say it always helps to let people know what’s going on). I also learned that you’ll be able to upgrade your tanks as you go through the campaign and bring these upgraded tools online to play with others. I’m not sure how the tanks will work if two players are used to using the same build. Like if I always played as the armored tank and so did my buddy, could we bring both of these online, or would one of us have to change up? Hopefully that will be answered sometime before the release in late 2011 on PSN, XBLA, and PC.