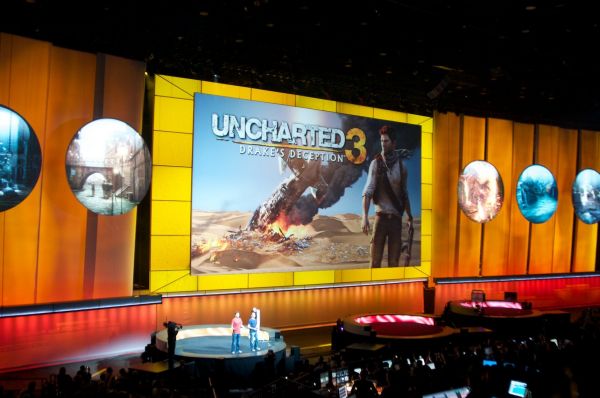 As E3 was winding down I finally got to get my hands on one of my most anticipated games of 2011, Uncharted 3: Drake's Deception.  I spied the playable co-op while Andrew was playing some Twisted Metal and immediately told our PR rep we had to play it.  Soon Andrew and I sat down with another developer to play through the game's new three player co-op adventure mode.

While Uncharted 2 had some arcade like co-op modes in the form of survival and small end to end missions, Uncharted 3 looks to up the ante by including an actual story complete with cut-scenes, new dialog, and even some returning characters from previous Uncharted titles.  Each co-op adventure is loosely tied to the next one, there will be items you gather in earlier ones that play a part in later, but the missions can be played in any order.  The co-op mode can be played with three players online, or you can play two players locally, and even mix and match local and online play. Our mission started with a small cutscene as Nathan, Sully and Elena investigating some strange markings on the floor.  In traditional - oops that thing will break fashion - the floor gives way and they crash down as our heroes plunge into well and eventually the water.  After swimming for safety they emerge into a castle courtyard.  It's here we are presented our first puzzle - gathering up small totems to place on pillars around to unlock...something.  Sounds simple - but the problem is we're under fire from enemies the whole time.

I was Elena (thanks for the view) through my play session and Andrew was Sully (and wandered around a lot).  Soon we began to follow our objectives which required two people to lift a statue and the third to grab the totem.  Then we had to guard the totem carrier back to the pedestal.  This became a rinse and repeat situation has we had to grab three or four different totems, but the level design was incredibly well done that we never bored of the situation.

This entire battle took place in the courtyard that was multi-tiered, with different sets of steps up to different levels on numerous sides.  Enemies would pour in from a variety of places and snipers would position themselves on the top of the castle walls making it imperative to communicate and help teammates.  There were plenty of weapons laying around or to pick up off fallen enemies and the gunplay and controls felt very similar to Uncharted 2 - that's a good thing.

Throughout the match we were able to earn bonuses for completing tasks like five head shots or reviving a fallen teammate so many times. After collecting the totems it was onto a vertical segment as we scaled a castle wall shooting at enemies as we looked up the face of it.  There's a great feeling of vertigo here as the camera sits close to the wall and looks up at our characters.  Shooting bad guys on top of the wall to watch them fall past all rag-doll like rarely gets old.  I was told the segment looks great in 3D, though I was a bit disappointed that I didn't hear a Wilhem Scream.

As I jumped from brick to brick, firing my gun and ducking under the cover of larger bricks I asked one of the developers near me if I could just book it up to the top?

"Sure, why not?" he responded.

So with a view of Elena's backside I hopped like a monkey up the wall, got behind the remaining few baddies standing up top and kicked them off.  That was pretty satisfying I thought.

Suddenly a cut scene kicked in and the helicopters rolled up - looks like Drake, Sully and Elena were in a bit of trouble - sadly I didn't get to see how the adventure continues as our demo ended. This demo of Uncharted 3 was my first experience with the series' co-op.  I was impressed by how the objectives required team work to be completed successfully.  I was happy that we could revive one another. I needed it (a lot).  The vertical elements also added another layer to quality action we've come to expect from the Uncharted series.  In short, my brief time with the demo served as a reminder that I owe it to myself as a gamer to finish Uncharted 1 and 2.

Uncharted 3: Drake's Deception is out this November exclusively on the PlayStation 3 with 3 player online co-op and two player local co-op and any mix there-of.  Other co-op modes have also been announced, including a "hunters" mode where players assume the role of the bad guys - think Gears of War 3's Beast Mode.  We'll have more on Uncharted 3 in the coming months.