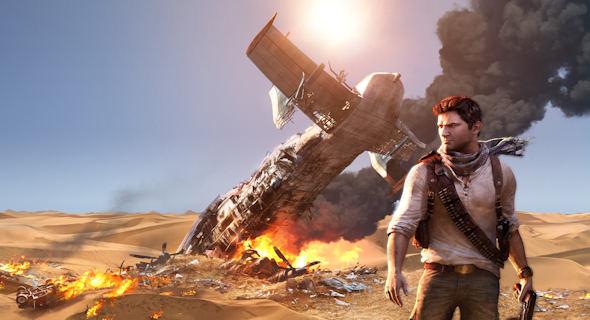 Can you smell something burning?

Co-Optimus is not a site that deals in wild speculation and rumor.  Who am I kidding?  Of course we do, especially if it's about a massive AAA co-op game!  Uncharted 3 has been officially announced and we know the game will have some form of co-op, but at what level?  Uncharted 2 had an excellent co-op mode separate from the main story, but we have already called for campaign co-op in Uncharted 3.  The latest nugget 'o' news may just suggest that Co-Optimus will get its Christmas wish, rather than the usual sack of coal.

Gamestop have rather prematurely put Uncharted 3 on their website for pre-order.  The game may not be out for another year, but money is money.  More interesting than this is the game description details; Gamestop have separated the number of online players from the number of offline players.  Why is this news?  Well it appears that online, up to 3 players are involved in a co-op mode, but offline there is a 1-2 player mode.  This would suggest to Co-Optimus the real possibility of campaign co-op both offline and online!  If anything, it "confirms" that the game will have couch co-op play, something missing from the previous title.

Wishful thinking?  Trust Co-Optimus to investigate CSI style and get to the truth.

In other Uncharted 3 news, the game saw it's first gameplay footage last night on Jimmy Fallon. Enjoy Nathan and Sully in a burning mansion with some impressive fire effects.