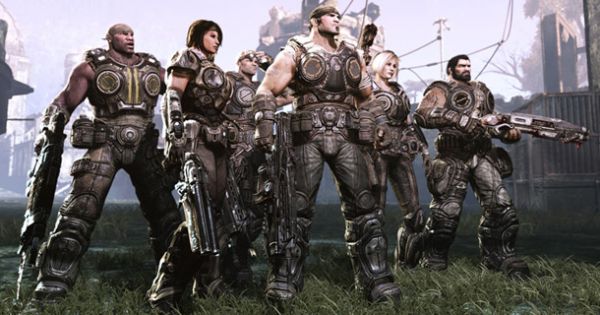 You've probably heard about the improvements to Gears of War 3's Horde Mode.  Buildable barricades, turrets, laser fences, bosses, yup, they're all there.  Have you seen them in action?  No?  Well you're about to.  G4's Kevin Pereira and Epic's Rod Fergusson break down some gameplay footage in this latest video.  The in-game action cuts out a little early, but you can pick it back up around the :34 second mark in the second vid.  If you like your game footage with 35% less awesome, you can stop the G4 video at the four minute mark.  Warning!  If you do that, you'll miss out on a fantastic Lester "Cole Train" Speight appearance, and the announcement of yet another NECA weapon replica.  Hint: It's awesome.

Pereira and Fergusson also discuss multiplayer level progression.  You will gain experience across all game modes in Gears 3, even the campaign.  That's welcome news to someone who is pathetically bad at Gears of War multiplayer.  (I'm way too cool to be somersaulting around like some member of a juvenile tumbling team.)  I'll take that chainsaw to the face, now, thank you.  Gears of War 3 will be out on September 20th.

Screaming is Speight's business, and business is GOOD!

What do you think, folks?  Are you ready for Horde Mode 2.0?