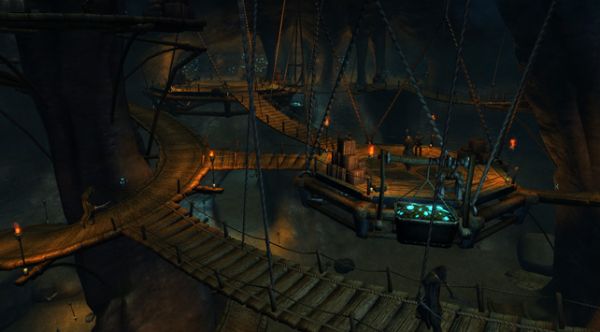 Nope, I’m not referring to Andrew’s adorable dogs, sadly. I continue our TWIC play-with-randoms assignment series and take it into the MMO waters. We joke about the hell of public lobbies and matchmaking over XBL and Steam and whatnot (though it sounds like everyone so far on this assignment has had either positive or apathetic experiences - no outright negative ones, interestingly enough), but MMOs have their own special flavor of this hell known as Pick-Up Groups (or PUGs, for short). PUGs are most commonly used for dungeon groups but can be used for more difficult quests or anything that requires a group of people. A lot of MMO players actually play on their own a lot of the time, so they’ll need to hook up with strangers to complete the more difficult stuff.

In roughly ten years of playing MMOs, I have a good amout of experience with the infamous PUGs (which can either refer to the group itself, or the actual party members randomly picked up). Some of it has been good, some of it has been average, and some of it has been bad (sadly, probably the brunt of it). I often joke to my friends that I’ve sworn them off, but that’s not entirely true - I just would really, really rather find time to do whatever it is with a full group of friends. See, in MMOs it’s not just about whether the random people you pick up are good or bad at their class, there’s also the loot to be considered when it comes to dungeons. For some reason, I’ve observed that MMOs are a breeding ground for extreme greed (though it certainly depends on the players and the game). I’ve had too many experiences where someone rolled on and received an item that they didn’t need (or worse, couldn’t even wear!) that someone else in the party could have used. This greedy mentality completely ticks me off, which, in addition to experiences with just plain poorly skilled players, has led me to generally avoiding the PUG.

A couple weeks ago, however, I realized I should be considering what I should do for our TWIC assignment. I was running around in RIFT on a lowbie rogue alt in the morning (none of my guildies were around since I keep pretty strange hours sometimes) when I saw people asking for more for the Deepstrike Mines dungeon. With no small amount of trepedation, I whispered the person and told them I was a DPS class that could come if they still needed me. Upon joining the group, I promptly ran to the auction house to replace my very level-stale bow. I didn’t want to be doing a dungeon with randoms with a bow 10 levels old! One of the members was kind enough to zone us in, and we were off.

Upon entering the dungeon, I gave my new team members a cursory glance. Two clerics healers, another rogue, and a warrior tank. Hmm. Did we really need TWO full healers? As our tank charged out without a word, I held my tongue on that thought. A couple minutes in, we all promptly died. Yep, I guess we do need two main healers with this group, I thought as I kissed dirt. Three people used their ability to “soul walk” (an ability that makes it so you can resurrect at your corpse instead of having to run back into the dungeon) - the three people who could res others. In my guild, we usually spread them out among the people who can res so we don’t have to run back unless we wipe (all die) too many times. This could be a long one.

We healed and mana’ed up and made ready for round 2. This time the warrior asked “ready?” Communication?! Unheard of! One of the healers responded “yes,” and the tank charged in. It went much smoother this time and no one died. Wow, communication is key, guys! We downed this first boss and something dropped for the warrior. No one else rolled “need” on it because no one else could wear it. My hard-won pessimism about the group was beginning to flicker. Would this possibly be an actual successful group?

To the great disappointment of the part of me that hates PUGs, the rest of the dungeon went fairly well (albeit slow because we had two cleric healers and only two DPS). The only hitch is that during one boss fight the boss hurled one of the clerics off the platform to die a terrible death hundreds of feet below. This happens sometimes with this boss (though it’s really best to avoid it) and if the party managed to kill the boss down a person, then the group will just run down right afterwards and resurrect the person. The hitch was that the warrior suddenly remembered he’d forgotten to kill a quest mob, so we spent a good 5 or so minutes after the boss fight killing trash mobs with 4 people instead of 5. It really would have been nicer if the cleric had released and run back to help us, or we had just gone down to res him and THEN gone to kill the quest mob. All in all, however, the experience was far from a disaster. We only wiped once at the beginning, downed all the bosses, and no one “ninja’ed” any loot. That’s about all I can really expect out of a PUG. Maybe PUGs aren’t really as bad as I make them out to be sometimes... still, though, I think I’ll still stick with playing with friends when I’m able.