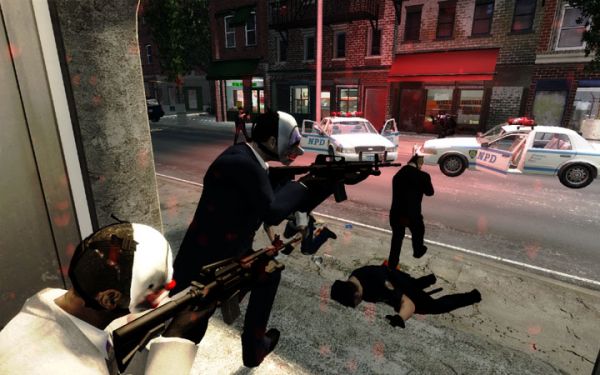 I was lucky enough to play Payday: The Heist a few weeks ago at E3.  It was one of my highlights of the show.  This new video from G4tv.com features 17 minutes of gameplay footage, and it reminds me of just what makes this game so special.  Once again, you can move throughout the level to get a feel for the job before the action begins.  In this case, it starts as a drug deal, but this is just a cover for an even bigger score.

Once the heist starts the player orders civilians to the ground while engaging in frantic gunfights.  At one point you can see the player level up through completing objectives.  There are plenty of mini-objectives, as well as full-on police assaults to repel.  All the while the four players are communicating with each other through in-game gestures and prompts, whether they are calling out heavy enemies, requesting ammo drops, or begging for a revive.  Check out the video to see why Payday: The Heist is one of my most anticipated downloadable titles of the year.

Payday: The Heist will (hopefully) be out later this year for the PSN and the PC.  It supports 4 player online co-op.