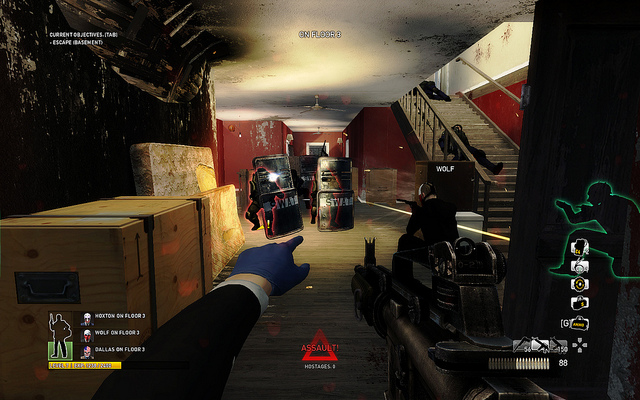 Simon Vicklund of Overkill Software recently sat down with the good folks at PlayStation.Blog to talk about Payday: The Heist.  If that name seems familiar to you, it's because I played through a level of Payday with Simon in my E3 preview.  And you have an incredibly random memory.  They talk about all things Payday, and even mention where they drew inspiration from (Dane Cook!?!?!).  Read on to see 17 minutes of footage edited into a :46 second, short-attention-span-friendly trailer and some of the highlights from the interview.

PlayStation.Blog: What was the inspiration for PAYDAY: The Heist? Why was it important to focus on four-player co-op and not going the Left 4 Dead route with 4 v 4?

Simon Vicklund, OVERKILL Software: The idea came from way back – a pet project of sorts for the guys on the team. Part of what eventually caused us to start working on the project was the profound truth that Dane Cook shared when he said that “every guy wants to be part of a heist” – we realized how incredibly accurate that statement is, haha. Then of course, a lot of inspiration came from several epic Hollywood movie movies such as “Heat”, “The Dark Knight” and “Die Hard”. There’s also an ambush sequence in one of the heists that is inspired by a scene in “Clear and Present Danger” – but you get to be the guys that are doing the shooting!

They go on to discuss the meaty experience system.

PSB: There are three main classes: Assault, sharpshooter, and support. What makes them differ in terms of tactics and behavior? Are some classes better suited to certain roles, such as crowd control?

Simon: There are actually no classes in the game – we don’t want to limit players to classes. “Assault”, “Support” and “Sharpshooter” are the categories in which we divide our upgrades – they are each a branch in the upgrade tree. If you level-up on the “Assault” branch you’ll get weapons upgrades that are suitable for an “Assault” style of playing; shotguns, more health, etc. If you level-up on the “Support” branch you’ll get stuff that’s suitable for a “Support” style of playing; machine guns, bags of extra ammo, etc. Similarly, leveling up on the “Sharpshooter” branch rewards you with the semi-automatic assault rifle, trip mines, etc. You can change from branch to branch at any point during the gameplay, and the game always shows you what the next upgrade is on each branch, so you’re pretty much picking and choosing what you want as the next upgrade. Again, the Assault/Support/Sharpshooter names are a way to categorize the upgrades *before* you acquire them, but once you actually *have* them you can mix and match as you want and aren’t limited to any class system. There are a total of 144 weapons, upgrades and perks in the game – and more will be coming in DLC!

So there you have it.  You can thank Dane Cook for the co-op in PayDay: The Heist.  When I played the game it did feel like a Hollywood film.  The upgrade system looks like a great idea in theory.  I can't wait to see it in action.  I'm also glad to hear that they plan on supporting the title with DLC.  It was one of my favorite co-op games of E3.  You can read the whole PS.blog interview right here, and check out my hands-on co-op impressions here.

Payday: The Heist will be out on October 4th for the PSN and the PC.  It will cost you a whopping $19.99, or you can pick it up free as part of the PSN Play promotion.