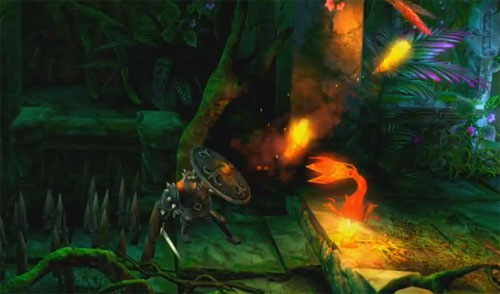 Trine's knight had his uses, but if I'm going to be blatently honest, I would only switch to him in one of three scenarios: I had jumped into a close quarters ambush, I absolutely had to block something like traps, or if he was the last man standing on my team. It's not that he was a bad asset to the team, but he was slower than the other two characters, he had to be in melee range, and lord knows he sunk like a stone when he tried to swim.

Luckily, Frozenbyte has noticed that the knight could use a bit of a boost. In a video developer diary entry, they show off some of the changes they've made to the knight in Trine 2, particularly concerning his shield. His shield can deflect fireballs, sending them bouncing off, or provide a platform to give a teammate a boost. The knight can also hold enemies with his shield, and then finish them off with a brutal finisher. Overall, the knight is looking much, much stronger.

Don't believe me? Check out the video for yourself.