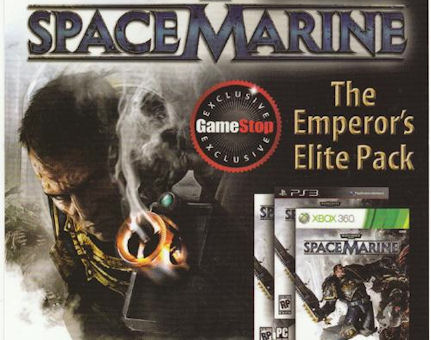 I'll be honest - I've been hounding THQ PR for months now trying to get any kind of details out of them on Warhammer 40K: Space Marine and its co-op mode.  The game is a ltitle more than a month away and we've still not heard a peep about its cooperative offerings, and honestly, that makes me nervous.  Now it seems a Gamestop Pre-Order promotion for the title may have leaked a few details regarding co-op.

The details come from the official forums from a user named Vetto.  According to him Gamestop had a pre-order lanyard with a card on it that gave some details about the game.   He was kind enough to scan in said card.

As you can clearly see co-op is mentioned as an online 5 player co-op game mode.  But there's also something precarious about it - it says it's a bonus "FREE" game mode (Day 30 DLC).  What this most likely means is that co-op isn't going to be available in the game out of the box, instead it's going to be a free piece of content available 30 days after the game launches.  It may also mean that the code to activate co-op is only available in new boxes of the game for 30 days and after that it'll be a premium piece of content.  Either way, it's troubling news.

With both Gamescom in Germany and the Penny-Arcade Expo in Seattle coming up this month, we can only hope the official co-op details have been revealed at either of these conventions.  Most likely we're looking at a survival/horde style mode for our co-op fix - which is just fine by us.  We've queried THQ once again for comment on the story and will update if we get any official response.