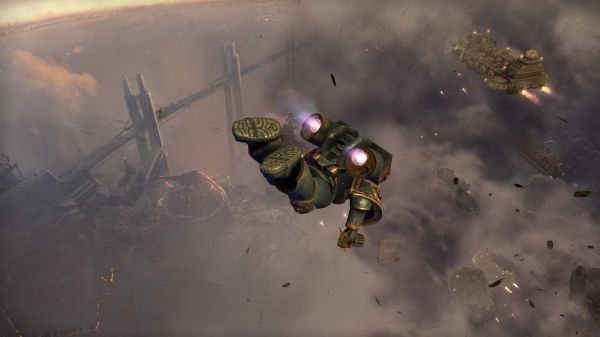 Get ready to dive into WH40k: Space Marine.  A single player demo is launching on the Xbox 360, PlayStation 3, and PC next week.  Xbox LIVE and PC players will be able to strap on Capt. Titus' big bad boots on  August 23rd.  The PSN will get into the action on the 24th.

The demo will give players first-hand knowledge of Space Marine's ranged and melee combat.  Unleash your fury on the invading Ork horde as you protect one of mankind's precious Forge Worlds.  You'll go to battle armed with six of the game's iconic weapons, including the devastating Bolter and brutal Chainsword.  Players will also get a chance to experience the game's Jump Pack, allowing Capt. Titus to thunder into battle from the skies above.  But wait - there's more!

Stay tuned to Co-Optimus for our hands-on Space Marine preview which will post today.  Find out if the game is worth looking into. (Hint: It is.)  Space Marine will support co-op, and we expect details soon.  The full game launches on September 6th.