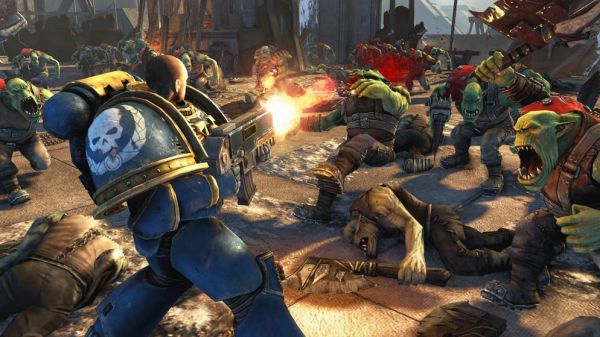 Don't worry PC gamers - we know you just got Star Craft 2 with its own versions of space marines, but Relic has some big beefy soldier goodness for you too.  Today they have announced that their game, aptly titled Warhammer 40K: Space Marine,  will be coming to your custom rigged neon glowing PCs in 2011 alongside the Xbox 360 and PlayStation 3 version.

Co-Op is still "unconfirmed" at this point, but we still are hanging on that we'll see some squad based action in the game.  Gameplay has been described as intense and brutal melee combat combined with gritty ranged that's a bit like God of War.  If the new screenshots are anything to go by, intense may be an understatement.  We loved Dawn of War 2 and its co-op, so please Relic, answer co-op fans prayers like you did PC gamers and give us the goods!