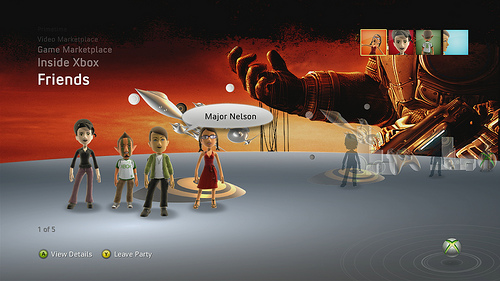 If you haven't heard, the Xbox 360 Dashboard is getting a complete overhaul this fall.  Just announced last night during the Tokyo Game Show Keynote the new dashboard will be released world wide on November 19th.

If you've been following the new NXE you already know that there are a ton of new features coming.  Not only is the navigation getting a complete overhaul, but things like community games, avatars, NetFlix integration, an enhanced marketplace and tons of other features are coming with it.  The best feature though, and the one that you dear Co-Optimus readers will care the most about is something called Live Party.

Live Party allows up to 8 players to join a persistent gaming group that can go between multiple games and play together, chat together, and of course co-op together.  So you have 4 players in your party playing Halo 3 co-op and another 4 players playing Castle Crashers co-op...in an instant the party leader can start a game of Duke Nukem 3D and bring the whole party into the game for 8 player co-op.  Can I get a w00t w00t!?!?

This is a feature that is long overdue.  Bravo for Microsoft getting this to work not only moving forward, but with all existing titles.  Well, at least that's the claim.  We shall see when this launches on November 19th.