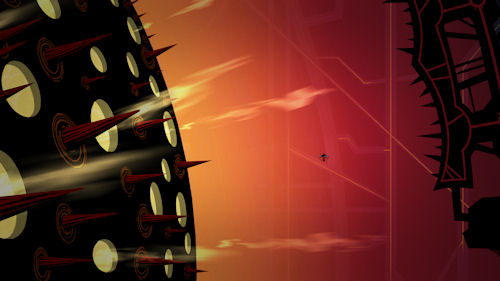 We last saw Insanely Twisted Shadow Planet at PAX East back in March.  Our editor was quite impressed with the title, with a unique art style from Michel Gagne, but only got a glimmer of what the co-op mode would entail.  With the game out tomorrow, the reviews have started to hit the net, and with it details on the cooperative aspect.

The mode is called Lantern Run and it involves four players either locally or online racing down a randomly generated tunnel trying to outrun a giant beast while carrying glowing lanterns.  Sounds simple enough, but according to the MTV Multiplayer review - there's a tactical element to it.

The mode is extremely tactical, as you often have one person shepherding a lantern while another is clearing the way for the shepherd, moving bits of debris and blasting enemies. Ship upgrades are crucial, as you want to give certain upgrades to certain players depending on their roles.

Sounds interesting for sure.  We'll have our review of the title as soon as we can.  The game is out tomorrow on Xbox Live Arcade for 1200