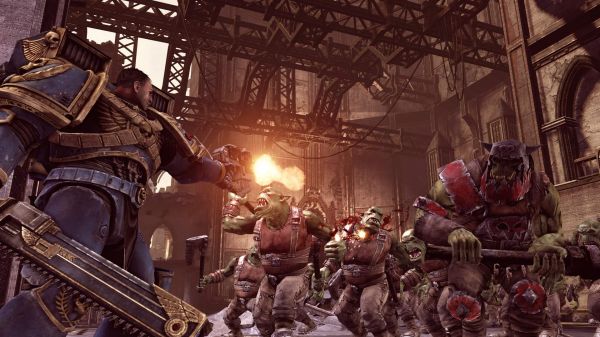 I've got two more WH40k Space Marine  videos for you today.  They may not be super-new, but as I said before, I was slacking on my Space Marine coverage, so it's time to catch up.  The first video is a cinematic little adventure that has some interesting plot points, it you're into that sort of thing.  The Orks are after some experimental device, and you have to stop them.  As if you need a reason to kill Orks.  I thought a Space Marine's default setting was "Obliterate." I didn't know he needed a damn reason.  Keen-eyed observers may notice the main character, Captain Titus, is almost always flanked by other Space Marines.  I don't want to get our little co-op hopes up.  I'm just making casual, slightly accusatory, observations.

The second video is a multiplayer romp where you can witness all the colors of the rainbow merrily murdering each other.  In this segment we'll see the different classes in action.  I usually play a heavy tank-like class (once again, because then I don't have to think).  The Havoc and Devastator classes were speaking my language.  But after watching this video I may have to strap on a Jump Pack and try out the Assault and Raptor classes.  The thought of dropping from the sky while screaming like a banshee and smacking some fool in the face with a Thunder Hammer makes me go to my happy place.

WH40k Space Marine is set for a September 6th launch.  It will be available on the Xbox 360, PlayStation 3, and PC.  We're pretty sure it will support 5 player online co-op.