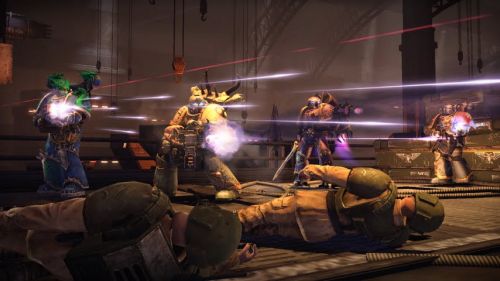 Space Marine's free co-op mode, Exterminatus, has been live for all of one week (one day, for 360 owners), and THQ has just announced plans for additional co-op content.  The new DLC will include an Exterminatus campaign titled "Chaos Unleashed."  It will put players in the mighty boots of the Chaos Marines.  You'll face Orks and the Imperial Guard as the Space Marines' evil, and therefore cooler, counterparts.  You just know that all of the Chaos Marines are wearing goatees under their helmets and calling each other "Bro."

This new Exterminatus mode will feature new arenas, boss rounds, and new Imperial enemies.  The DLC will also include three new multiplayer maps, which the game desperately needs.   Ten new achievements and trophies will also be for the taking.  "Chaos Unleashed" will run you 800 MSP, or $10 American Earth Dollars.  If you really feel like throwing money at some digital decoration, you can pick up one of four new swanky armor skins: Salamanders, Alpha Legion, Legion of the Damned, and Blood Angels for -GAH!- $3 bucks a piece!  Wow...

In less insane news, all Space Marine players will be treated to a new capture the flag mode, which is ABSOLUTELY FREE!  That's more like it.

The new Space Marine DLC is scheduled for a December release on the Xbox 360, PlayStation 3, and PC.  It supports four player online co-op.