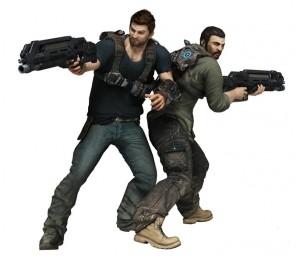 Sensible shoes - the much needed accessory when fighting aliens

Confused?  This is the brain mashing kind of physics you can expect on 7th February 2012 with the release of Namco Bandai's Inversion.  Co-Optimus has had some hands on time with the single player elements of the game, but have yet to see the drop in/drop out 2 player co-op in action.  A new trailer remedies this, showing plenty of 2 player action and a smidgeon of bromance.  The game currently looks like a mix of the massively successful Gears of War and the less successful Psi Ops or Fracture.