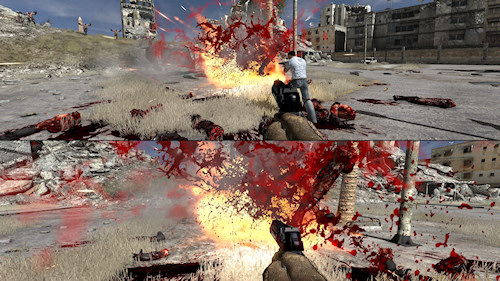 For some reason a lot of developers don't realize how many people actually want to play split screen on a PC. Perhaps its the growth of home theater PCs, the availability of bigger monitors, or people just plain wanting to play with a some buddies from around the town - every time we see a big PC release we have dozens of users clamoring for split-screen play.  Serious Sam 3: BFE will be bucking the trend and including split-screen play on a PC game.

Some claim it might be a play to get more money out of gamers by not including the feature - and it appears that the fake CFO of the game's developer, Devolver Digital, might just agree.

“These Serious Sam nerds need to get a job and pay for their own copy of Serious Sam 3: BFE. We’re losing a ton of cash on this little split screen feature,” added Devolver CFO Fork Parker. “By the way, do they make split screen adult films? Watching four at once would save me a lot of time in the shower. F*ck, don’t print that.”

Serious Sam 3: BFE will support up to four players on a single copy by using a combination of the mouse and keyboard as well as gamepads.  Deathmatch, Capture the Flag, Survival, Beast Hunt, and Co-Op are all supported.