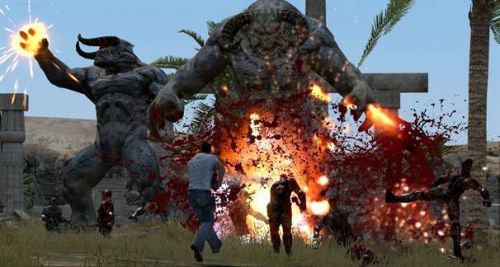 I really like Serious Sam, and had an awful lot of chaotic fun with the PC version of Serious Sam 3: BFE, so when an Xbox Live Arcade port was announced, I was more than happy to check it out. As with most good things in life, it comes with a downside, and a potentially... Serious... one.

Other than the addition of extremely generous autoaim and a limit of 4 players in co-op (2 in splitscreen) rather than 16, the XBLA version of Serious Sam 3 is pretty much identical to the PC release. There's a bit of texture pop-in and screen tearing as well, but for the most part, the game performs admirably on the hardware and maintains a solid framerate. It even lets you quicksave! Hooray!

My biggest gripe is (of all things) switching weapons. Your arsenal is mapped to all eight directions on the D-pad, and we all know how reliable the 360's D-pad can be. Since most of the bigger firefights are based on crowd control and effective use of available weapons, every time I switched to the shotgun instead of the machine gun I was annoyed. Eventually you learn to be a little more deliberate with your button presses and the issue largely disappears.

This release also allows you to purchase the campaign expansion, Jewel of the Nile, as DLC (PC players can obtain from Steam for $9.99). Jewel of the Nile picks up somewhere near the end of the BFE campaign as Sam is heading home for some well-deserved R&R. As it turns out, there's yet another alien artifact to power up and he must embark on a brief, albeit challenging campaign exploring the Temple of Isis. Toss in an upgraded sniper rifle, four-barrel laser gun and a battleaxe to play with, and you're set.

The bevy of co-op modes from the PC release are intact, though the "Classic" and "Coin-Op" variants are disabled unless you've also bought Jewel of the Nile, which means you'll have to plunk down the full 2400 MS Points in order to have all of the co-op options. 1200 points is already an expensive proposition despite being half of what the game costs on PC, but locking players out of a couple toggleable options is downright irritating.

The reason behind the split package is as old as the XBLA service itself: the main campaign alone butts up against the XBLA size limit, so the decision was made. Honestly, if they wanted to charge the equivalent of $30 to get the total package and have price parity with the PC version Croteam/Devolver probably could have released this directly as a Games on Demand title and I'd feel a little better about the pricing. Of course, I know little about the process of releasing a game on either service, so perhaps there was a roadblock.

Serious Sam 3: BFE arrives today on Xbox Live Arcade for 1200 MS Points. The Jewel of the Nile DLC package is also available for an additional 1200 MS Points. Get them both at Xbox.com.

Check out the launch trailer below!