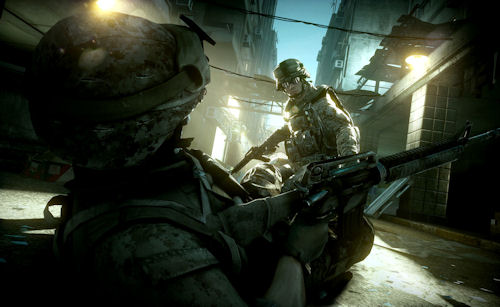 During the EA press conference at Gamescom 2011 the company showed off Battlefield 3's cooperative gameplay mode in a short realtime demo running on the PlayStation 3.  There was one short mission on display in which the two characters needed to rescue a hostage and get him to safety.  The co-op mode will support two players online and each mission is its own story with full dialogue as part of a larger co-op campaign.

The demo contained co-op tactics like players clearing rooms by coordinating with each other and planning when to attack and open doors.  In one section of the demo a player uses a sniper rifle with night vision on to highlight scoped enemies for the other.

After the hostage was rescued the duo had to get out of the building, and escort a vehicle convoy under enemy rocket fire from rooftops. Co-Op will allow players to revive each other when shot down.  All in all people seemed pretty impressed with what was on display, and the team promises a variety of mission types including vehicle based co-op missions - even in planes!

The co-op demo was playable is playable on the show floor.  We hope EA releases a trailer of the gameplay soon.

We've embedded a video below of the full demonstration. There's also new screenshots of co-op and multiplayer.

We'll have more exclusive coverage of Battlefield 3 next week when Co-Optimus travels to PAX Prime.