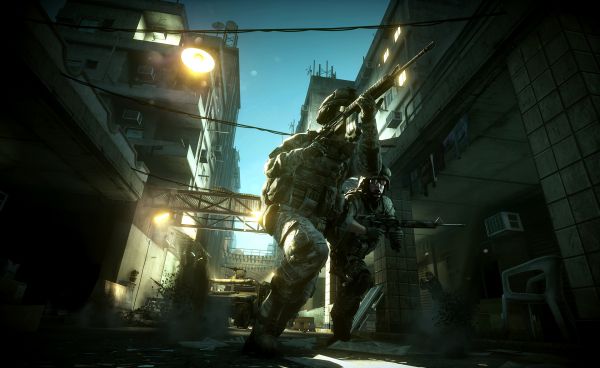 So, last week we brought you the new trailer and some screenshots for Battlefield 3's co-op campaign, which is a two-player side story. This week we have some good news and some bad news to reveal.

Bad news first: no splitscreen. Yes, we know. It sucks. But, really - who didn't see this coming? With the level of visual detail we've seen so far, and EA's "buy new" perks and the way they're pushing Origin...there's no technical nor fiscal reason to believe that this game would ever support splitscreen. It's just not economic.

That's a bitter pill to swallow for all of us. So take a few breaths; hopefully the new co-op gameplay details from the DICE Battleblog and Lead Co-op Designer David Spinnier will help wash the bad taste out. First of all, the cooperative campaign exists of six missions - including a fighter jet piloting segment - which have randomized elements. Whether this is just randomly spawning weapons and enemies or a freak earthquake here and there we don't yet know, but as anyone else who loves Rainbow Six Vegas 2's Terrorist Hunt mode knows, this can be done right.

Next, Spinnier confirms the ability to revive your co-op partner, and mentions that the scoring is based on your combined efforts. You'll also be able to track your co-op statistics on the Battlelog alongside your multiplayer stats.

The final detail, which also happens to be my favorite, is that your cumulative co-op score will be a persistent trait of your "soldier". The specific example given was that certain weapons could be unlocked in the cooperative campaign for use in both co-op and versus multiplayer modes.

It seems there's a lot of give-and-take when it comes to Battlefield 3 co-op. Ultimately, though, the real test is how fun it is. And so far it's shaping up to be a huge contender for some serious fun.