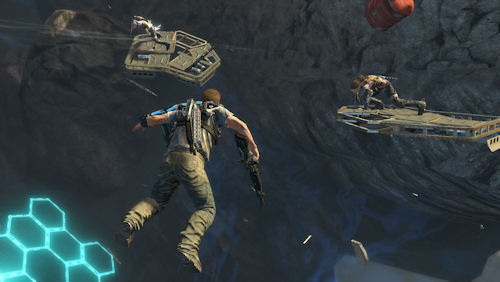 Inversion is a co-op shooter in which gravity, or lack there of, plays a huge part in gameplay.  The Saber Interactive developed 3rd person shooter is a bit of a buddy co-op story, therefore it features co-op play throughout the campaign for two players.  The latest batch of screens joins the recently released trailer for the game from Gamescom 2011.

We went hands on with the game at E3 2011 and found it to be rather entertaining, despite the gimmicky looking gravity feature.  We even saw it later at a Namco-Bandai preview event and thought it was coming together quite well.

The Grav-link can utilize two different types of gravity: Low Gravity and High Gravity. If you shoot a burst of low gravity, all the objects or people that were hit in that small area will become suspended in mid-air for a short period of time. While they are in this mode, you can grab debris to use as a shield or grab an enemy to dangle in the air (though the rep cautioned me that they will likely try to shoot you in the face when you do this!). While you’re in this “grab” mode, you won’t be able to shoot your weapon, but it will certainly lend itself to some pretty cool co-op maneuvers.

Inversion launches next year on the Xbox 360 and PlayStation 3.