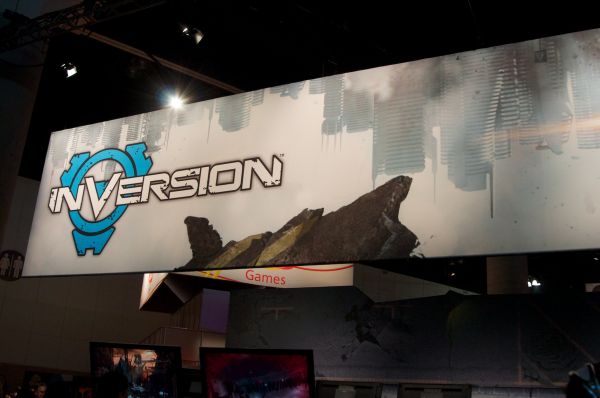 Who here wants to play with a little bit of gravity? How about some 2-player co-op third-person shooter? You too, huh? Let me relay to you a little experience I had with a little game called Inversion here at E3 2011.

When you think of solid Third-Person run-and-gun titles, you often mentally envision a heavy-hitter in the gaming world like Gears of War. Those are some pretty big shoes to fill (seriously, look how huge those guys are!) and the task was not taken lightly when the team behind Inversion took it on.

To begin with, Inversion is a shooter at its core. What sets it apart though, is the use of gravity as a weapon. Not just like the Gravity Gun from Half Life 2, but the entire world can easily be flipped any which way at random - and you can use that to your advantage. I was unfortunately unable to view the world-changing, but I did get a taste of the gravity altering action in a 4 player free-for-all versus match.

Inversion in the standard mode I played showed a lot of running, gunning, and throwing seemingly magical bursts at your enemy to disrupt their path. This magic is actually throwing your enemies into zero-gravity momentarily. Players are able to use jets of energy to move around slightly in the zero-g situation, and you can still aim and shoot from that suspended state. It's really a good way to catch people off guard, but it's not completely crippling so if it happens to you, it's manageable as long as you don't panic.

Another thing we were able to do is zero gravity jumping, which you could do at certain points on the map. You can also "Grab" cover to hide behind, instead of having to run for it under gunfire. I didn't get a chance to really use either of these attacks, but exploding the gravity around an enemy certainly gives you the advantage. I came out second place of four on that map, first time playing if that is any indication (and I was a gravity-altering kinda girl, let me tell you).

Playing the game was smooth, and the versus was well balanced for new players and experienced ones. Using various techniques and strategies can give you the upper hand against some of the more experienced players. I'm looking forward to using the gravity attacks with a co-op partner (2 player online, or offline co-op). Full campaign co-op on both Playstation 3 and Xbox 360, this one is sure to be a riot.